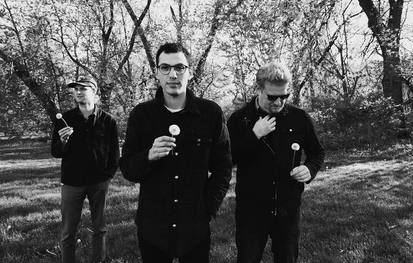 This show is presented in partnership with New Ghosts. Tickets are $15. If you pay for a ticket to Miles Okazaki (performing at BOP STOP on 4/6 at 8pm) tickets will only be $10 and can be purchased at the door.

About Typical Sisters:
Something like sisterly love sits between these three. Typical Sisters—the trio of Greg Uhlmann, Clark Sommers, and Matt Carroll—draw from a deep symbiosis that has been a lifetime in the making. Uhlmann, guitarist, recounts that he met drummer Matt Carroll when he was himself “still in a belly.” They have been friends since so it’s easy to imagine their creative partnership as the sort that cannot be untethered: their notions, impulses, and ways of communicating have developed as one.

Carrol and Uhlmann’s head start, however, does not diminish the impact of the band’s third member, bassist Clark Sommers. Sommers appeared to Uhlmann at casual living room jams, already a seasoned musician when the guitarist was only fifteen. “I was an insecure teenager,” Uhlmann recollects, “I just remember how contagious Clark’s enthusiasm and positivity was. He really encouraged the approach that I wanted to take with music and I feel like it helped carry me through moments of doubt.” This history truly sets the trio apart. The group’s make-up isn’t owed to their networking within higher education or their navigation of the scene; it arose from deep, longstanding personal bonds. And this shows.

The work that these three produce as Typical Sisters is incredibly heartfelt, innovative, and warm. Every melody, harmonic progression, and rhythmic feel within a composition is revered and built upon by all involved. That reverence makes space for a type of vulnerability that has earned them comparisons to jazz iconoclasts Bill Frisell and John Scofield (Chicago Reader) as well as indie rock icons Bibio and Do Make Say Think (Scottie McNiece of International Anthem). The Sisters cherish this space accordingly. While the three members are restlessly active outside of the trio (indie rock bands Fell Runner and Ohmme, improvisation-based groups Ba(SH) and Rooms Trio, quirky-playful-avante-garde group Similar Fashion, and jazz singer Kurt Elling’s band are just a few of their respective current involvements), each makes room for Typical Sisters, forming an outlet that serves as an apex of their experiences.

This height is put on brilliant display with Hungry Ghost, the group’s follow-up to their 2016 self-titled debut. Hungry Ghost builds upon the raw chemistry of Typical Sisters with the band returning to its live studio session approach and embellishing it with subtle yet affective production work, incorporating overdubs and track manipulations in post with Tim Carr (a friend and bandmate of Uhlmann’s in LA’s Fell Runner). Hungry Ghost covers a vast territory of different genres and moods as though glossing over them like a cool breeze. It’s nine tracks touch on influences from rock, Americana, minimalism, the music of singer-songwriters, and a rich history of American improvisers without overemphasizing or too heavily quoting any single one. This amalgamation is just one of the groups great strengths alongside their lyrical musicianship and their generous and effective notions of support.

Hungry Ghost teeters between an adherence to a sweet façade and an underlying, subtly disharmonious energy. Its title is an evocative reference to a Buddhist concept. The hungry ghost is a spirit possessed by the kui—the demonic yin half of the yin and yang. Throughout the living world, diametrically opposed tendencies toward dissonance-destruction and virtuous harmony co-operate. Life-force goodness exists but, as the demonic undertow beneath the harmonious surface of Hungry Ghost reminds us, our impulse to dominate, accumulate, grasp, and cling countervails. As we wrestle the hungry ghost, we make choices