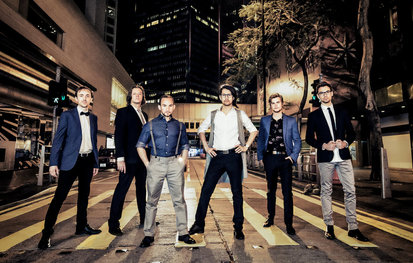 “Accent is the most amazing young vocal group on the planet! Great arrangers and singers, they come up with the most gorgeous harmonies, impeccable swing, grooves, feeling and pitch.”— Jorge Calandrelli, Grammy Award-winning composer and arranger

In the increasingly popular world of a cappella singing groups, Accent has carved out its own niche. Inspired by the wizardly jazz harmonies of TAKE 6 and, before them, The Hi-Lo’s, the six men of Accent, all of them accomplished arrangers and instrumentalists in their own right, decided to take their love of close-harmony jazz singing – the denser and more intricate the better – as far as it could go.

Accent is six singer/arrangers, all of whom have considerable musical careers in their home countries: Jean-Baptiste (“JB”) Craipeau (France) – tenor 1; Simon Åkesson (Sweden) – tenor 2; Danny Fong (Canada) – tenor 3; Andrew Kesler (Canada) – tenor 4; James Rose (United Kingdom) – baritone; and Evan Sanders (USA) – bass. Having originally met and recorded together via the Internet, they have since come together to record and tour, becoming an international vocal supergroup. Their amazing blend and arrangements have been acclaimed by a cappella devotees and fellow musicians alike. Cedric Dent of TAKE 6, Clark Burroughs of The Hi-Lo’s and Alan Paul of The Manhattan Transfer have all sung their praises. Accent is, arguably, the most spectacular jazz vocal group since TAKE 6, singing original arrangements that are daring and dazzling but never lose the melody, even as they effortlessly execute seemingly impossible chordal shifts.

The improbable meeting of Evan, James, Andrew, Danny, Simon and JB could have happened only in the age of social media. The self-described “jazz vocal nerds” became long-distance fans of each other’s elaborate multi-tracked jazz vocal videos on YouTube. In 2011 they decided to join forces, collaborating online on new vocal arrangements and videos. Since then, they have released two albums (fan-funded at https://www.patreon.com/Accent), performed at the London A Cappella Festival, played dates in Germany, France, Sweden, Mexico and the U.S., and were featured in a sold-out Christmas show at the Royal Albert Hall with British big-band leader Guy Barker and jazz singers Kurt Elling and Clare Teal.

Accent first album, Here We Are, released in 2015, introduced their luscious blend and innovative jazz arrangements. Their latest album, In This Together, represents a milestone: it’s the first time the group has actually recorded together in the same studio. Far surpassing the usual a cappella group fare of pop covers, the album features an all-original program that showcases their fearless jazz harmonies, but all in the service of accessible, memorable melodies and passionate lyrics. In addition to three songs by members James, Simon and JB, the album includes a brilliant, previously unrecorded song written by original TAKE 6 members Mervyn Warren and Mark Kibble, and contributions by Michael Jackson-collaborator Siedah Garrett and Denmark-based jazz bassist Kristin Korb. As Andrew says, “These are songs that people have never heard before. Nobody’s going to be saying, ‘Oh, this is the a cappella version of this song.’ No. This is the original version.”

With In This Together, Accent has made a giant leap, establishing a unique identity that straddles both the a cappella and the jazz worlds. As Alan Paul of The Manhattan Transfer said, “You guys carry on the vocal group legacy.”