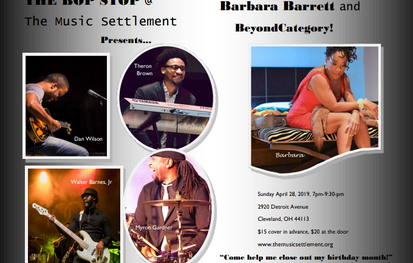 Vocalist, Barbara Barrett, returns to the BOP STOP to celebrate her birthday with her incredible band, Beyond Category. Featuring:

Barbara Barrett started musical training at age six, which included theory, piano, and flute. As a seventh grader, she realized she could sing solo, loved it, and has been doing so ever since! The solo vocal journey started with formal instruction at The Music Settlement, and continued with a Bachelor's Degree in Vocal Music Education from The University of Cincinnati's College Conservatory of Music. During that time, she was a founding member of Hanarobi Contemporary Gospel Ensemble, along with studying the European classical music which was part of the degree criteria. But, Barbara realized during her student teaching, that the public school classroom was not her best option, so she opted for Plan B and went to nursing school, putting her music in a "safe place" until she made some decisions.

After returning to Cleveland, beginning her nursing career, and starting a family, she made time to sing several years with The Cleveland Orchestra and Blossom Festival Choruses, performing at Severance Hall, Carnegie Hall in New York, and Chautauqua Lake, before embarking on solo jazz performances around Northeast Ohio. She's been well received in Central Florida, receiving excellent reviews from The Central Florida Jazz Society; in the DMV area of Washington DC, Maryland, and Virginia, New York City; and Las Vegas. Not to leave out her love of operatic music, when historic Karamu House produced Scott Joplin's opera "Treemonisha", she sang the lead role of Monisha and received an actor's Guild Award for the performance!

Currently, Ms Barrett is principal soprano for Dr J LanYe's Opera by the Lake, having recently performed arias from her "Highway to Canaan" for the James A Garfield Historic Site. She's had a busy summer schedule traveling around Northeast Ohio, Columbus, Erie PA, and New York state singing: background vocals for One World Tribe (world music); lead vocals with Cleveland based Ikembe Jazz Band with a Twist; and background for Jamaican reggae artist JR Blessington's Str8 Fiyah Band. Throughout the year when not traveling, she cantors, helps with original compositions for the music of the Mass, and sings in the choir at her home base St Agnes + Our Lady of Fatima; and is a teaching artist for ROAM (Roots of American Music), as well as Dance Cleveland. Yes, she also loves liturgical and West African dance!

Barbara has produced two CDs, "Joyous", and "Dawning" (her original compositions), available through major online distributors. A solo artist, she still loves harmony and background vocals, including studio recording, and creating multiple harmonic tracks. Excerpts from this concert will be included in her upcoming CD!