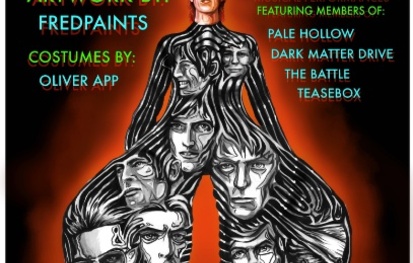 David Bowie was known as a transformative and innovative artist who was never able to settle on one idea. Throughout his career Bowie used the idea of persona as a way to express himself. In our lives we all sometimes “wear masks” and project our ideas through these masks.

“A LAD INSANE” is a look into the idea of persona and self expression. Through visual art and music, Cleveland artist, Jeff Ritchie AKA Fredpaints, has designed a show that celebrates Bowie not only as an artist but also as a muse. The art and music featured in the show will be used by Fredpaints to express his own psychological path and feelings about his persona in the world.

“A LAD INSANE” will feature large and small works of art created by Fredpaints. Many of the exhibits will be interactive and allow the viewer to participate in the show. Following the gallery show there will be a performance celebrating the music of David Bowie. Local musicians and performance artists will be collaborating to create a narrative structure which encapsulate the theme of the show.

“A LAD INSANE-A TRIBUTE TO DAVID BOWIE” will be an art opening not to be missed! A portion of the proceeds from the event will benefit The Music Settlement.

Founded by Almeda Adams in 1912 as part of the Settlement movement to welcome new immigrants to Cleveland through the common language of music, The Music Settlement provides early childhood education, music instruction, and music therapy to people of all ages and levels of experience in Northeast Ohio.