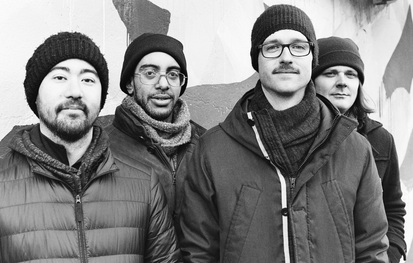 Best known as the brain behind the critically-acclaimed big band behemoth, Big Heart Machine, Brian Krock is a fierce and probing improviser on the saxophone and a central force in the creative music community in New York City. After years steeped in the world of large ensemble jazz (as documented on his critically-acclaimed 2018 recording Big Heart Machine), Krock initiated his exciting new quartet- LIDDLE- as an opportunity to focus on the group improvisation and collective interchange that is a hallmark of the jazz tradition. Comprised of Finnish guitar prodigy Olli Hirvonen, bassist Marty Kenney, and drummer Nathan Ellman-Bell, along with Krock on saxophones and clarinets, LIDDLE is a modern jazz quartet dedicated to performing new compositions which the New York Times describes as “muscly, warped original music, informed by metal, serialism and the jazz avant-garde.” With a highly anticipated recording coming out on Outside in Music on April 26th 2019, LIDDLE will be embarking on a national tour in support of that album in May.