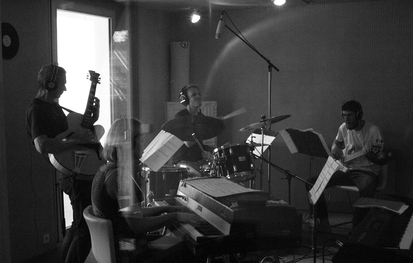 Monika Herzig returns to BOP STOP with an all-star quartet to celebrate the release of the record, The Time Flies.

The fusion style of The Time Flies combines funky grooves and rock influences, New Orleans second lines, open ballads, free explorations, even and odd meters, improvisation and composition, melodic and tasteful without underminig the natural beauty of the music. Rather the opposite, the music has room to breathe and unfold, to communicate in its most honest and pure format.

This performance will feature:

When Monika Herzig (pi) and Peter Kienle (git) were in studio with Berg in 1998, the first three pieces were shot on The Time Flies: Berg in Focus. Unfinished at that time, the original soundtracks have only now been taken in hand for the production of the album. These saxophone tracks remained untouched, were laid free, compositionally re-framed and recorded. Live in the studio, no overdubs! A session with a soloist who, though physically absent, was still very present. A kind of live remix with complete band.

Since 1988, Herzig and Kienle have been working in the US jazz scene as composers, arrangers and bandleaders. Between the production of their own albums, the couple works on stage and in the studio for stylistically different claimants such as Leni Stern, Rufus Reid, Tower of Power and Sting.

When they meet Bob Berg, it is no longer a blank slate. Born in Brooklyn / NYC in 1951, he moved from piano to saxophone at the age of 13, studying and playing with people like Horace Silver, Gary Burton, Randy Brecker, Wolfgang Muthspiel, Barbara Dennerlein and Chick Corea. When Miles Davis brings him into his band in 1985, the good reputation of the profiled, dedicated player with substance and bandwidth increases dramatically. Be-Bop, R & B and Fusion, Charlie Parker, Wayne Shorter, David Sanborn - all this blends seamlessly into Berg's own mature profile.

Such is the fusion jazz on The Time Flies. Funkyness, also sometimes rocking underfed. Grooves between New York and New Orleans, loosely balancing ballads, free fall. Even and odd, improvisation and composition flow constantly in and around each other.Melodious and full-bodied, without stifling the natural elegance of the music in sugary arrangements. On the contrary, the thing has air and space, lives, communicates, shows form and shadow, is "real".