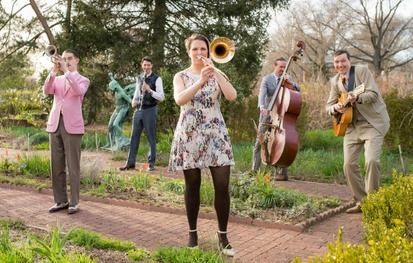 Garden Party’s repertoire has been established by Asher’s love for New Orleans legends Louis Armstrong and Kid Ory, songwriting mastery of Hoagy Carmichael, Irving Berlin, Fats Waller, vocal innovators Ella Fitzgerald, Billie Holiday, Nancy Wilson, and her own songwriting inspired by Pacific Northwest roots and more than a decade of New York City life lessons. Asher has thoughtfully drawn on all of these influences to stake her own claim in a largely male-dominated musical world. Will Friedwald of The Wall Street Journal wrote, “In traditional jazz, the trombone comes closest to the human voice, although up to now it’s rarely been cast as a distinctly female voice. On her new album, “Dreams May Take You,” Ms. Asher plays with both grit and grace...” Combining a deep reverence for those who originated these styles with a desire to bring the party to every room, “she and her groups...have fun with vintage material but don’t make fun of it, as so many post-modern groups have done” (Paul de Barros,The Seattle Times).

Video Links:
“Riverboat Shuffle”
“My Life Would Be Easy”
“When You Wore A Tulip”

“Emily and her friends have understood something deep about the delicate balance between honoring the originals and creating something new.” - Michael Steinman, Jazz Lives