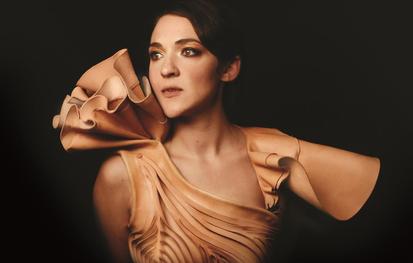 North Carolina bred, Brooklyn based singer/multi-instrumentalist Becca Stevens is a composer, educator, and leader of the Becca Stevens Band. Her original music is hailed worldwide for its its intricate harmonies and rhythms subtly rooted in Jazz, Irish/Appalachian Folk, indie pop, and West African music.

Boundless in the elements from which she draws her inspiration, Stevens is known for her unique ability to craft exquisite and authentic compositions both for her own band, and for GRAMMY award winning artists who run the gamut of genre from Jacob Collier, to Michael League (Snarky Puppy), and most notably with folk legend David Crosby. Stevens is a member of Crosby’s Lighthouse Band whose album Here If You Listen (BMG ’18), features the distinct songwriting of its four members—Stevens, Crosby, League, and Michelle Willis.

Stevens has received copious praise from the likes of The New York Times, was Downbeat Magazine’s 2017 Rising Star Female Vocalist, and was featured on NPR Music’s “Songs We Love”. She has toured the world performing with her band, and collaborating with peers such as Brad Mehldau, Kneebody, Esperanza Spalding, Billy Childs, Ambrose Akinmusire, Vijay Iyer, Taylor Eigsti, José James, Eric Harland, Gerald Clayton, Travis Sullivan’s Björkestra and many others, and was a featured composer/performer on Snarky Puppy’s Family Dinner, Vol. 2 (GroundUP).

In 2015, Perfect Animal, the highly anticipated follow up to Weightless (Sunnyside), produced by engineer Scott Solter, was released on Universal Music Classics. Becca released her latest album Regina (GroundUP) in March 2017 featuring Laura Mvula, Jacob Collier, David Crosby, produced by Troy Miller (Gregory Porter, Laura Mvula, Amy Winehouse) and co-produced by Jacob Collier, and Michael League. Regina is a tribute to queens as well as the name of her self-made muse who inspired all of the compositions on the album.

“Stevens is effortlessly charming in her stage demeanor and lights up like a firefly in performance. She is a treasure.”
- Kurt Elling for Jazz Times