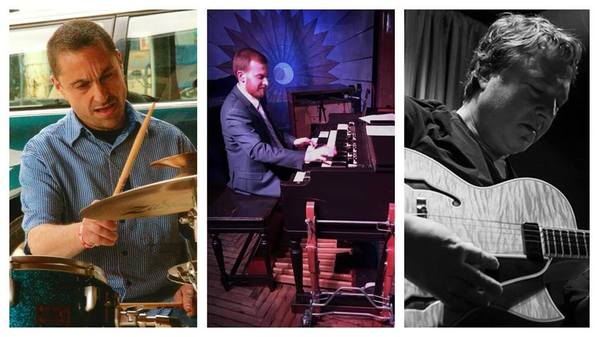 Tapping into the current Hammond organ revival, Chris Hovan’s Organic Trio revisits the classic organ combo genre with a renewed sense of purpose that puts swing and soulful energy at a premium. Drawing from both the classic and contemporary jazz repertoires, the trio features a rotating cast of musicians from Ohio and Michigan. For this special gathering, Hovan features up-and-coming organist Clif Metcalf. Hovan first encountered the sophomore at Hope College back in 2016 while attending Tony Monaco’s first Jazz Organ Summit in Holland, Michigan. Along with Columbus guitar legend Derek DiCenzo, the trio made their debut at Cleveland’s Bop Stop in July of 2018. Most recently, the trio traveled to Detroit for a performance at Cliff Bell’s. Joining Hovan and Metcalf in their return performance at the Bop Stop will be Detroit guitarist Larry Barris.

A respected photographer, journalist, and musician, Chris Hovan has been involved with music since starting piano lessons at the tender young age of five. He attended the prestigious music conservatory at Baldwin-Wallace College where he studied classical percussion with George Kiteley. It was at this time that he began expanding his sphere of influence by studying Latin and Brazilian percussion styles and collecting instruments. Hovan also studied drum set for a year at the Berklee College of Music in Boston with Skip Hadden, John Ramsey, and Tommy Campbell. Upon his return to Cleveland, he honed his big band and chart reading skills with the legendary Harry Damas.

Over the past 25 years, Hovan has played in a variety of Northeast Ohio venues with many of the city’s finest players including Rich Holsworth, Josh Smith, Francois Roland, Larry Ross, Jackie Warren, Jeremy Poparad, and Bobby Selvaggio, and Mark Russo. He has also shared the stage with such national artists as Arturo O’Farrill, Brian Lynch, Alex Harding, and Frank Lacy. Hovan presently works as percussionist with the horn-based ensemble Funkology and plays drums in Bob Niederriter’s trio which regularly features Columbus organ greats Jon Eshelman, Robert Mason, and Tony Monaco.

Clifton (Clif) Metcalf is a junior at Hope College in Holland Michigan, where he studies with Artist-In-Residence and jazz organ monster, Tony Monaco. Clif is focusing on Jazz Organ Performance at Hope College, which is believed to be the first and only institution in the U.S. to offer such a program. In the fall of 2016, he participated in the 1st annual Jazz Organ Summit, a gathering of prominent artists and enthusiasts from around the United States that featured Jim Alfredson (Organissimo, Root Doctor, Hammond TV) and Gerard Gibbs (Organized Crime, RYZ). The event was hosted by Tony Monaco and the Hope College Jazz Faculty. Clif was honored to share the stage with Mr. Monaco, Chuck Loeb and Harvey Mason (Fourplay), as a part of the summit headline concert.

Last year, Clif was part of the 2nd Jazz Organ Summit at Hope where he again had the chance to work with Monaco and Gibbs. Clif is a member of several student ensembles, including the Hope College OGD Trio and Jazz Arts Collective, and is the organist for the college’s gospel choir under the direction of prominent jazz vocalist, Edye Evans Hyde. He is a recipient of the Swaby Scholarship, the Freshman Music Prize, Distinguished Artist Award, and the Jazz Alliance of Mid Michigan Izenson Memorial Scholarship. His Hammond Family status has allowed him to meet and make valuable connections with jazz organ greats including the legendary Dr. Lonnie Smith.

Larry Barris started playing guitar at a very young age. By the age of 13, he was already working professionally in and around Detroit with "The Black Nasty," a well-known local R&B band of the era.
Larry quickly made a name for himself among the Chitlin’ Circuit, playing behind comedians such as Rudy Ray Moore and Redd Foxx.

In 2001, Larry released his eponymous first CD, followed in 2003 by the release of his second CD, Love On Me. Larry officially joined organissimo in December of 2012, a Lansing-based organ trio known for their original material and unique take on everything from the pop music of The Beatles to the neglected gems of classic organist Big John Patton.