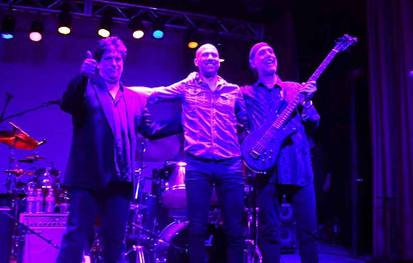 CuDa, Schief & CuDa was formed in the summer of 2006 by Tony and Chris Cuda to perform original prog/jazz/fusion instrumental music. We wanted to integrate all of the great musical influences we have acquired and blend them with our own original styles. The emphasis had to be on composition because that is the most important aspect of music for Chris and myself. We recently added the very talented Matthew Schieferstein on drums. This has allowed us, once again, to write and record new music!

TONY CUDA – Tony Cuda is a schooled musician, writer and bass player. After spending three years at Berklee School of Music in Boston, Tony hit the road with an original fusion band in the early 1980’s. After playing the New England scene for about 5 years, Tony returned to Cleveland to rejoin his brother Chris, eventually co-founding their current group. Tony plays a 1963 fretless Fender Jazz and a fretted Spector bass guitar. His main influences are Weather Report, Yes, King Crimson and Miles Davis.

MATTHEW SCHIEFERSTEIN is a drummer with over 25 years of playing experience. Having earned a Bachelor's Degree in Jazz Studies from Bowling Green State University, he has played in various musical settings from small group jazz and big band to country and heavy metal. He has shared the stage with such legends as Blue Lou Marini (Blues Brothers, Frank Zappa, SNL Band), Matt and Gunnar Nelson, Howard Johnson (SNL Band, Jaco Pastorius, Charlie Haden), Gary Mule Deer, and many others. He has performed in groups that have opened for the likes of Ted Nugent, Molly Hatchet, and Frijid Pink to name a few. Matthew draws inspiration from any musician or group, regardless of genre, that plays with conviction, honesty, and a sense of purpose. Matthew plays Pearl Drums and Sabian Cymbals.