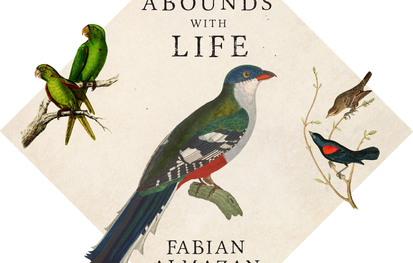 Pianist and leader of the acclaimed Rhizome ensemble, Fabian Almazan, returns to the trio setting accompanied by Linda May Han Oh (bass) and Henry Cole (drums) to celebrate his new release, This Land Abounds With Life on Biophilia Records.

Hailed by Terence Blanchard as “one of the great young talents of his generation,” a composer of “intense and crystalline trio music” (Ben Ratliff), pianist Fabian Almazan issues an impassioned appeal to our common humanity and the welfare of our planet on his fifth outing as a leader, This Land Abounds With Life, releasing on his one-of-akind Biophilia imprint. For the Cuban native, who spent his teens in Miami and is now based in Harlem, NY, it was time to reflect on his own life journey and his momentous return to the island of his birth in 2016, after an absence of 23 years.

With his formidable trio colleagues Linda May Han Oh (acoustic/electric bass) and Henry Cole (drums), and string quartet on just one track, Almazan unveils music of both extraordinary complexity and transparent beauty. He employs electronics, his own field recordings from Cuba, and other devices to create an epic portrait of nature and folkloric expression, wrought by one of the most advanced jazz sensibilities in the world today.

Almazan, Oh and Cole debuted as a trio in 2011 on Personalities, celebrating with a breakthrough week at the Village Vanguard that was webcast by NPR. That core trio remained integral to the lineup of Almazan’s next project, the hybrid ensemble Rhizome, adding string quartet and Camila Meza on vocals (documented on the albums Rhizome and Alcanza), reflecting the leader’s extensive training in classical composition. With This Land Abounds With Life, Almazan returns his focus to the Personalities trio, a smaller unit that nonetheless also conveys the full scope of his emotional and farreaching vision.

In addition, Almazan has made his mark in Terence Blanchard’s Quintet and E-Collective as well as Justin Brown’s NYEUSI, the Ambrose Akinmusire Quintet and many others. He has topped the Rising Star Pianist category in the Downbeat Critics Poll. For both pragmatic and aesthetic reasons, he chose to record This Land Abounds With Life at Esplanade Studios in New Orleans: “I’ve recorded there with Terence at least five or six times,” the leader notes. “New Orleans was the first major American city I ever saw, and it reminded me so much of Cuba. I’ve learned that for centuries Havana and New Orleans were connected via the ports and grew from exposure to each other’s cultures. It’s a place where a distinctly new identity arose from a rich history of multiculturalism.”

This Land Abounds With Life will be released by Biophilia Records as a Biopholio™, a double-sided, 20-panel origami-inspired medium bursting with vibrant artwork and liner notes; each one made entirely out of FSC-certified, robust paper, hand-folded and printed using plant-based inks. In each Biopholio is a unique code to digitally download the music in the preferred format. This innovative design caters to the environmentally conscious listener, who is aware of the harmful effects of plastic yet feels that a digital download is just not enough. Biophilia’s artists are united by a common interest in having a positive impact on the environment and our communities. To that end, they collaborate with organizations that specialize in conservation, sustainability and outreach initiatives.