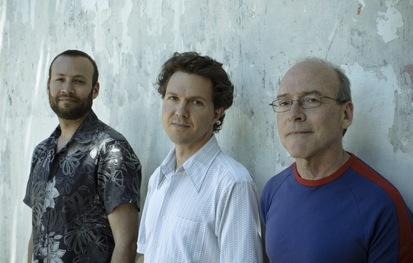 The trio formed in 2005 to record an album of pieces written in the aftermath of 9/11. That “engaging and sublime meeting” (Signal to Noise) of Crump on acoustic bass with guitarists Liberty Ellman and Jamie Fox, produced Rosetta, which was greeted with inclusion on multiple top ten lists and ecstatic reviews for its narrative depth and outstanding performances. “Here is a string ensemble for the new century!" raved All About Jazz NY. Their second album, Reclamation (2010), “a low-key marvel” (JazzTimes), “bareness in emotion” (NPR), was much more than a follow-up effort, though it was the earlier album that gave the trio its name and its mission: to inhabit the dynamic and rhythmic flexibility of a drumless ensemble and embrace its challenges and expanded responsibilities; to reject restrictions of genre; to explore different territories of feel, texture, color; to groove. With Thwirl (2013) “a declaration of increased proportions, a culmination of superior interplay, chemistry, delicacy and vision” (Downbeat), the group revealed a new telepathy. Rosetta Trio, whose members have for years collaborated with many of the leading lights in the New York creative music scene, has developed into a formidable unit, sensitively and powerfully rendering Crump’s often profound, sometimes playful and always honest music. Now, after fifteen years of collaboration, the trio charts new territories of shape and feel on Outliers, arriving February 19, 2019 on Papillon Sounds.

Ellman and Fox were both fixtures on the San Francisco Bay area scene and had toured internationally before arriving in New York in the 90s. Aside from his own critically-acclaimed recording career, Ellman has been featured as guitarist and producer in Henry Threadgill’s innovative group, Zooid, and has performed with other jazz visionaries such as Steve Coleman and Greg Osby. An accomplished jazz composer in his own right, Fox brings his idiosyncratic folk, R&B and blues perspective that has contributed to the music of such legends as Joan Baez and Brother Jack McDuff.