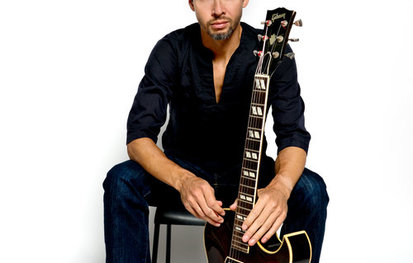 The year 2017 marked the centennial of Thelonious Monk's birth, full of commemorations and remembrances of the master composer. After performing in a tribute concert that year, guitarist Miles Okazaki decided to embark on a deep dive into Monk's music, documenting his progress as a recording project. Over the course of the next year, he exhaustively researched every composition in the repertoire and translated each one onto the guitar, staying as faithful as possible to the original material while improvising arrangements with a focus on rhythm. With 70 compositions spanning six full-length albums, this is the first time that the complete Thelonious Monk songbook has been recorded on a single solo instrument.

Miles Okazaki is a NYC based guitarist originally from Port Townsend, a small seaside town in Washington State. His approach to the guitar is described by the New York Times as “utterly contemporary, free from the expectations of what it means to play a guitar in a group setting — not just in jazz, but any kind.” His sideman experience over the last two decades covers a broad spectrum of approaches (Kenny Barron, John Zorn, Stanley Turrentine, Dan Weiss, Matt Mitchell, Jonathan Finlayson, Jane Monheit, Amir ElSaffar, Darcy James Argue, and many others). He was seen most prominently with Steve Coleman and Five Elements from 2009-2017. As a leader Okazaki is known primarily as a composer, having written four volumes of original compositions over the last 12 years. His most recent album Trickster was released on Pi Recordings last year to wide acclaim, receiving editor’s picks in Downbeat and JazzTimes, called “a true concept album” by the Wall Street Journal and “a mature work for the ages” by PopMatters. This album of Thelonious Monk compositions is his first recording of standard repertoire.