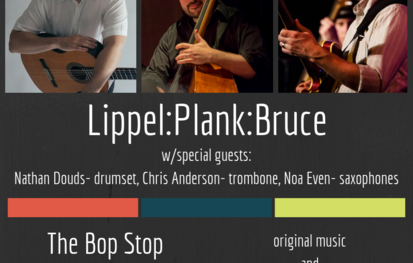 The Lippel:Plank:Bruce trio makes music that flows seamlessly between through-composed and improvised material, drawing on the members' collective experience in various musical contexts including jazz, contemporary concert music, and free improvisation. The group is known for highly energetic and interactive performances that are not afraid to go wherever the music leads.

A native of Oberlin, Ohio, bassist Aidan Plank enjoys performing a diverse range of music throughout Northern Ohio. He studied with bassist and composer David Morgan as well as with Kevin Switalski of the Cleveland Orchestra. Aidan is a graduate of Cleveland State University. Aidan has performed with Dan Wall, Joe Lovano, Judi Silvano, Joe Maneri, Janis Siegel, Frankie Avalon, Tierney Sutton, and many others. Aidan played baroque bass in the premier of Joseph-Nicolas-Pancrace Royer’s Le Pouvoir de l’Amour (composed in 1743) in 2002 at Oberlin College as well as in the world premier of Randall Woolf and Robin Stranahan’s ‘pop-up’ opera Frozen Community, produced by Real Time Opera in 2013. Along with enjoying playing in the Cleveland Jazz Orchestra, Aidan can currently be seen performing explorations of improvisation in duo with guitarist Daniel Lippel. Aidan teaches in the Jazz Studies program at Kent State University, as well as at Cuyahoga Community College’s “Jazz Prep Program”.

Dan Bruce is a recent transplant to Ohio after spending a decade as an important member of Chicago’s jazz community. He is active throughout the Midwest and nationally as a performer, recording artist, composer and educator. He has performed on more than twenty-five albums as a sideman, and has released two albums, A Single Thread and Earthshine, as a leader. As a performer and recording artist, Bruce has had the opportunity to work with a number of eminent musicians including Seamus Blake, Ali Jackson, Dan Wall, Lynn Seaton, and The Cleveland Jazz Orchestra.