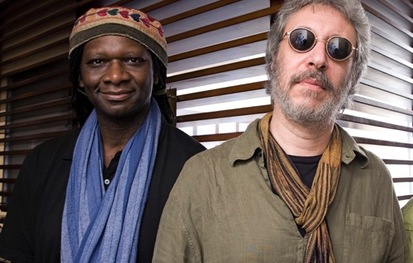 Hamid Drake and Adam Rudolph met at the age of 14 years old in a downtown Chicago drum shop. For the past 40 years, their shared love for rhythms and musics of the world has taken them around the world in performing together with Fred Anderson, Don Cherry, Yusef Lateef, Pharaoh Sanders, Hassan Hakmoun, Hu: Vibrational, Mandingo Griot Society, and Adam Rudolph’s Moving Pictures among others.Their shared Chicago roots and the creative outlook, longtime global music research and performing experience have allowed them to forge a uniquely shared musical understanding and creative outlook. As Drake reflected upon their influence upon each other, “I have been developing a hand drum concept on the drum set while Adam says he is developing a drum set concept on his hand drums. We understand one another.”

With their new Karuna duet Drake and Rudolph bring their unique and evolved rhythm languages to the fore, reaching to inspire any audience though spirited dialogue. The name Karuna reflects their ongoing research into the connection of the inner life to musical expression and speaks to the idea of creative action as a gesture of compassion.

The Hamid Drake and Adam Rudolph duet traces it beginning to a chance encounter between two 14-year-old aspiring percussionists in a downtown Chicago drum shop. Their shared love for rhythms and music of the world and music’s’ relationship to matters of the spirit led to years of shared creative journeys.

In the mid-1970s they performed and recorded with AACM co-founder Fred Anderson, and in 1977 they joined Foday Musa Suso in founding Mandingo Griot Society, one of the first groups to combine African and American music. By 1978 they were touring Europe with the Don Cherry and since that time have performed together in projects with Yusef Lateef, Pharaoh Sanders, Hassan Hakmoun, Hu: Vibrational and Adam Rudolph’s Moving Pictures. Their shared Chicago roots and longtime global music research and performing experience have allowed them to forge a uniquely shared musical understanding and creative outlook.

For the past four decades composer and percussionist ADAM RUDOLPH has performed extensively throughout North & South America, Europe, Africa, and Asia. He has released over 30 recordings under his own name, featuring his compositions and percussion work. Rudolph composes for his ensembles Moving Pictures Octet, Hu Vibrational, and Go: Organic Orchestra, a 30-piece group for which he has developed an original music notation and conducting system. He has taught and conducted hundreds of musicians worldwide in his Go: Organic Orchestra concept.

In 2015 Rudolph was artist in residence at the Center for Advanced Studies at the University of Illinois and received the prestigious Danish International Visiting Artist award from the Danish Government. During his residency he led master classes at universities and presented in concert his Go: Organic Orchestra concept with members of the Danish Radio Orchestra.Rudolph has performed with Don Cherry, Sam Rivers, Pharaoh Sanders, Muhal Richard Abrams, Shankar, Wadada Leo Smith, Philip Glass, Jon Hassel, Omar Sosa and Fred Anderson. He toured extensively and recorded 15 albums with Yusef Lateef including duets and their large ensemble compositional collaborations.

Rudolph is known as one the early innovators of what is now called “World Music”. In 1978 he and Kora player Foday Musa Suso co-founded Mandingo Griot Society, one of the first groups to combine African and American music. In 1988, he recorded the first fusion of American and Gnawa music with Sintir player and singer Hassan Hakmoun. In 2006, Advance Music published Rudolph’s book, Pure Rhythm, now a classic rhythm repository used worldwide.

HAMID DRAKE was born in Monroe, Louisiana but for the most part was raised in Chicago. In 1974 he began what was to be a long-term musical relationship with Fred Anderson who introduced him to performing with many of the other artists in the AACM. In late 1977 Drake joined Adam Rudolph and Foday Musa Suso to form the Mandingo Griot society, one of the first groups in the United States to explore the relationship between traditional West African and American musical idioms. He met Don Cherry when the group recorded their first LP on Flying fish Records. Drake’s relationship with Cherry continued until Cherry’s passing in 1995 doing many tours throughout Europe, Japan and the United States with him. Don Cherry provided a major breakthrough for Drake not only musically but spiritually as well. Since 1987 Drake has recorded toured extensively in Europe and the US with German saxophonist Peter Brotzmann and also with bass player William Parker in several of his ensembles and with many other artists.The list of the people that Drake has worked and recorded with includes David Murray, Pharaoh Sanders, Iva Bitova, Misha Mengelberg, AB Bars, Luc EX, Adam Rudolph, Bill Laswell, Archie Shepp, Napoleon Maddox(Iswhat), DVK with Ken Vandermark and Kent Kessler, Nicole Mitchell, Punkt, Rob Wagner , Rob Brown, Cooper-Moore, Lewis Barnes, Kirk Knuffke, Fred Anderson, and Kidd Jordan.In 2005 Drake formed the group Bindu and a few years later Bindu Reggaeology both formed with the purpose of highlighting through music and spoken word the spiritual, cultural and social importance that the Divine Mother Tradition (Divine feminine) has played throughout world.