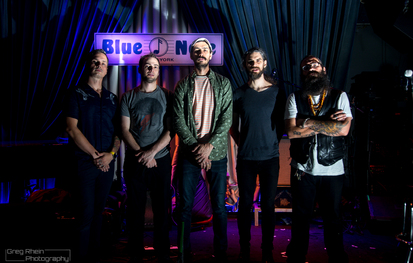 Hipster Assassins is a collaborative endeavor of virtuosic talent that came together in New York City at the historic Zinc Bar in 2010. Over the next 2 years the band had a weekly Monday night residency at Zinc where it started to develop its own sound playing both originals and covers. Since its inception, the band has played all over the world, including Montreal Jazz Fest, the Jazz Cafe in Costa Rica and plays once a month at NYC’s famous 55 Bar.

Each of the five members bring their own unique, original voices to the band. Their vast experience with legends of the industry has allowed the members of Hipster Assassins to bring unique voices and ideas to the band, and has been essential to the development of their unique sound.

Felix Pastorius, Bassist: The son of Jaco Pastorius who has worked with the Yellowjackets, Jeff Coffin’s Mutet, A$AP Rocky, and Onyx Collective, has worked hard and achieved his own voice on the electric bass. This voice is the anchor of the band.

Chris Ward, Saxophonist: Chris has worked/recorded with Michael Stipe and Fischerspooner, Lord Huron, The Family Crest, and various projects from all genres, from video game soundtracks to jazz big bands.

John Bendy, Guitarist: Brought up in the blues, John learned his craft from masters Bill Perry and Popa Chubby. His fierce, virtuosic style comes from a blend of the blues and high energy jazz fusion.

Mike Bendy, Bass: The idea of a second bassist in a band could be strange to some, but Mike’s virtuosic skill and experience give him the tools to complement the other low-end instruments in the band perfectly. Outside of Hipster Assassins Mike has performed with Kenwood Dennard, Alex Foster, Sean Wayland, and metal band Res15.