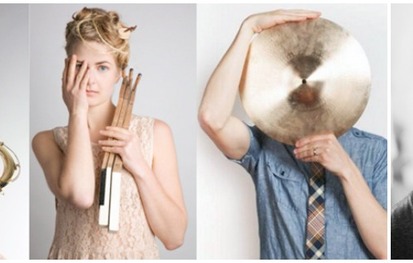 TMT Trio joins forces with visual artist Jerry Birchfield for a unique multi disciplinary experience. This event will also be a CD and book release for a 2 CD set of music by TMT Trio with a book of photography from Jerry's most recent show “Asleep in the Dust” which is part of the ongoing series, “Yes, They Were Made To Level".

After five years as a band, the trio released their debut album, Star Ballad, in 2017. TMT has toured the U.S. extensively, and most recently performed a two-hour composition in the Akron Art Gallery as part of the exhibit Jerry Birchfield: Asleep in the Dust. TMT Trio is proud to have worked as educators in various youth jazz programs including the Boys and Girls Clubs of Cleveland, Cuyahoga Community College and SOTA Arts.

Jerry Birchfield’s practice revolves around the question of how images emulate or subvert the sources from which they came. Through complex photographic and sculptural processes, his works go through various stages of transformation, from surrogate to self-reference. The making of meaning is synonymous with the search for the beginning and the end.

Jerry Birchfield, born 1985, lives and works in Cleveland, OH. He holds an MFA from Cornell University (2014). In Cleveland, Birchfield has exhibited at SPACES Gallery, Zygote Press, the Museum of Contemporary Art, the sunroom, and the Cleveland Foundation as well as the Print Center in Philadelphia. Stagger When Seeing Visions is Birchfield’s first institutional solo exhibition.