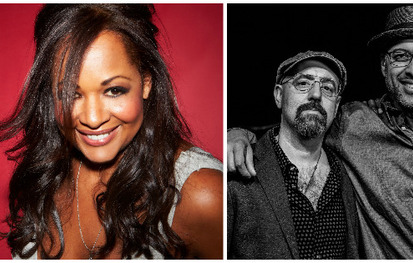 Over the years, La Tanya Hall's versatility in a multitude of genres has made her a first-call vocalist for some of music’s most celebrated artists, including Diana Ross, Bobby McFerrin, Harry Belafonte, Michael McDonald, Burt Bacharach, Quincy Jones, Aretha Franklin, Rob Thomas, Patti Labelle, Michael Feinstein and Steve Tyrell. Developing her solo artistry, she has performed in recent years at some of New York’s most renowned venues, including Jazz at Lincoln Center, Birdland, Symphony Space, Iridium, and Feinstein’s/54 Below. In addition, she has appeared as a soloist with the American Composer’s Orchestra, the Colorado Symphony, the Jefferson Symphony and the St. Louis Symphony. Tonight she celebrates her latest release "Say Yes" With Andy Milne and UNISON. Featuring:

For more than 25 years, Juno Award winning pianist/composer Andy Milne has demonstrated boundless versatility, collaborating with dancers, visual artists, poets and musicians spanning jazz, classical, pop, folk, and world music. With this group, Milne returns to his first love. Enriched with creative insights from all his projects, he rediscovers the intimacy of the piano trio. The synchronistic relationship Milne has enjoyed with bassist John Hébert since 2010 spurred the impetus to create this trio. They are uniquely rounded out with Clarence Penn on drums who represents complimentary threads within the fabric of Milne’s piano trio philosophy --the intersection of texture and groove.

Clarence Penn is one of the most in demand jazz drummers in the world. A composer, bandleader, and prolific producer, he performs regularly with Maria Schneider, Dave Douglas and Uri Caine. Since 1991 when he arrived in New York City, Penn has placed his unique blend of mega-chops, keen intellect, and heady musicianship at the service of a staggering array of A-list artists including Ellis and Wynton Marsalis, Betty Carter, Stanley Clarke, Steps Ahead, Makoto Ozone and Michael Brecker. His impressive discography includes several hundred studio albums, including Grammy-winning recordings from Randy Brecker and Maria Schneider, representing a 360 degree spectrum of jazz expression. He has toured extensively throughout the United States, the Americas, Europe, Japan, and Southeast Asia. He has composed music for films and commercials, and produced tracks for numerous singers in the pop and alternative arenas. Whether leading his own band or performing as a sideman, Penn brings unfailing versatility, professionalism and an ability to find creative ways to interpret a global array of styles and idioms.