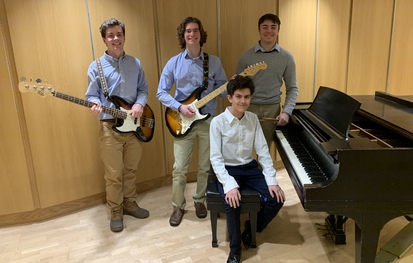 Sozzle, the rock quartet from University School, is the product of a class in US’s Music Department called simply ‘Rock Band’. This class was added to the Music curriculum in 2010 by US Music faculty David Kay. He has been its sole teacher throughout it’s history. A member of that very first group, Brett Fromson, earned a degree from the University of Southern California in the schools Popular Music Major and is an active performer and composer. Other participants since the class’s onset have gone on to study at schools including Berklee College of Music.

Rock Band groups have been accepted into the Live Nation High School Rock Off competition every time they’ve entered. Sozzle is hoping to progress far in this year’s (2020) Rock Off.

At BOP STOP, Tthe group will be performing the music of The Who, The Beatles, Led Zeppelin, the Grateful Dead, Santana/John McLaughlin, Herbie Hancock, CCR and others. Sozzle will also be performing originals by group members.