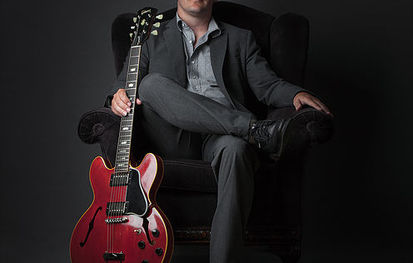 Guitarist and composer Daniel Bruce presents the newest lineup of his acclaimed ensemble the :beta collective! The group will debut a number of compositions written for the new instrumentation.

A powerhouse group of the Midwest's top improvisers, Dan Bruce's :beta collective is a modern jazz ensemble that performs original compositions and highly personalized arrangements of jazz standards. The members' unique musical identities combine to form a powerful and unmistakable group sound. A hallmark of the compositions is the interaction between thoroughly composed music and free improvisation, much of it set to expansive and driving grooves.

The new album, Earthshine, garnered a 4.5 star review from All About Jazz. Critic Troy Dostert writes, "...a generous, accessible sound with an exploratory edge, Bruce brings a finely-polished technique that is at the same time subtly discontent, searching for new expressions and willing to take some chances along the way."

By embracing the influence of his heroes from the jazz tradition and retaining his own musical personality, guitarist Dan Bruce has developed a unique and impressive musical voice. A recent transplant to Ohio after spending a decade as an important member of Chicago’s vibrant jazz scene, he is active throughout the United States as a performer, recording artist, composer and educator.

Bruce’s first album, A Single Thread, received praise from both fans and critics. Martin Gladu of allaboutjazz.com wrote, “A Single Thread combines his learned guitar work, which is at times reminiscent of Ben Monder, with substantive yet airy, contemporary sounding compositions”, and Chuck Vecoli ofjazzreview.com called it “A brilliant first effort”. Bruce’s much-anticipated second album, Earthshine, came out in October of 2017 on the Ears and Eyes label. He has performed on more than twenty-five albums as a sideman, and he has worked with a number of eminent musicians including Seamus Blake, Ali Jackson, Dan Wall, Lynn Seaton, Marvin Stamm, The Cleveland Jazz Orchestra, Daniel Lippel, Rose Colella and Marquis Hill.

"Daniel Bruce is without a doubt one of the finest of today’s young jazz guitarists. He plays with great creativity, soul and intelligence.” -William Piburn, Fingerstyle Guitar Magazine