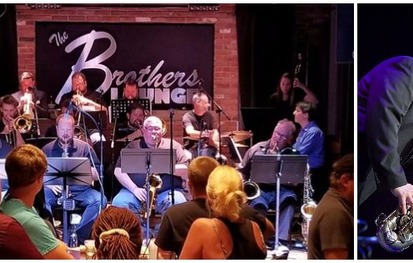 The Skatch Anderssen Orchestra returns to BOP STOP with special guest and three time Grammy winner Ralph Lalama for a special tribute to Thad Jones! The SAO is proud to announce that the Bay High School Jazz Band will be the band's opening act for this fantastic concert! Directed by YSU alumnus Darren Allen, the Bay Jazz Band has been part of the SAO's "Opening Act" series that features local student talent before our regular Monday Night performances. Make sure to get there early and catch this outstanding group!

A solid fixture of the New York jazz scene and respected world-wide, Ralph Lalama embodies the best of the jazz sound ideal – great time, great swing, expressed through great melodic ideas. Everything he says and plays comes out of his deep connection and appreciation for “the Beat.” Jazz critic Zan Stewart put it succinctly: “Lalama is a grand, modern-minded storyteller…a first-class jazz soloist.” He excels in a chord-less trio format with his amazing command of the harmonic progressions articulated through his horn. But on top of being a great jazz soloist, Lalama is equally a solid veteran of jazz ensembles and orchestras. Over his impressive career starting with Woody Herman, Buddy Rich, and the Mel Lewis Orchestra – now the Vanguard Jazz Orchestra – he has honed the craft of sonic blending.

In the tradition of the great large Jazz ensembles of the last half of the 20th century, the Skatch Anderssen Orchestra began carving its own niche into the Northeast Ohio area musical landscape around 1990. Every Monday night, this powerhouse 17-piece big band performs music of Basie, Ellington, Buddy, Thad & Mel, Maynard, Kenton, Woody and many more at the historic Brother's Lounge on West 117th & Detroit in Cleveland, Ohio.

Bandleader Eric Dregne's intention is to enlist the finest musicians for the SAO to guarantee you will hear a high-powered, high quality performance of many of the tunes you know (and some you may not but are sure to enjoy).

Not content with playing only the standards of the big band golden era, the SAO features many compositions of local composers and arrangers, along with more recent popular artists such as Gordon Goodwin and Alan Baylock.

When the band is in full swing, it's easy to see why the SAO has gained a steady following in Cleveland and surrounding areas.