With Drake/Morron/Tomino/Wenninger Quartet and Machine Listener 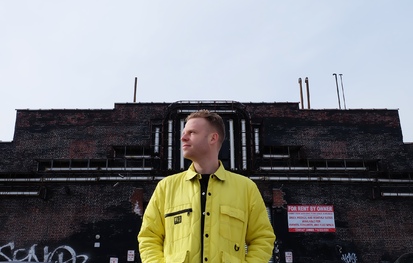 Join us for a triple bill of improvised music and noise featuring opening act Drake/Morron/Tomino/Wenninger Quartet followed by Jonah Parzen Johnson. Machine Listener will close out the night.

Jonah Parzen-Johnson makes music that challenges listeners with experimental electronic textures and embraces them with warm approachable melodies. His solo performances are a deeply intimate experience, as he endeavors to share who he is, how he see’s our world, and the temporary moments of community that we can all embrace together. In his hands baritone saxophone and hardware electronics become a vehicle for “de facto folk songs,” (Bandcamp Daily) as if he is, “constructing a whole musical town from specific, character-driven notes”.

Since 2015, Jonah has toured over 40 thousand miles, by himself. He has performed on 4 continents, and in 9 countries. Everywhere from Jazz festivals to DIY noise clubs, living rooms to Contemporary Art museums. In July 2017, he released his third full length solo album, “I Try To Remember Where I Come From”. The release has been described as, “haunted by abstraction but guided by a compassionate pulse,” (New York Times), as it, “vividly channels free-jazz with elements of improvisation and composition, combining to create a sustained meditative mood, transporting listeners to another world.” (Downbeat Magazine). In June 2019 he followed up the release with his first live recording, “Helsinki 8.12.18”, an exciting preview of the music to come on his upcoming album LP, “Imagine Giving Up”, out January 2020 on We Jazz Records.

Jonah is a long-time Brooklyn resident, but his circular breathing, multi-phonics and inclusively experimental style owe a debt to Chicago, the city where he was raised. His devotion to an almost vocal approach places him in new territory for the instrument. Paired with a one-of-a-kind compositional style that utilizes analog synths, and hardware samplers & sequencers, Jonah continues to find himself ready to share his own unique musical world.

Cleveland-based producer, sculptor, and visual artist Matthew Gallagher records music under the name Machine Listener. Through most of the 2010’s, Gallagher has been a central fixture of the Cleveland noise scene by way of his now retired concert series Research and Development and through his continued role as a mastermind of the annualVoice of the Valley Noise Rally festival in West Virginia. Gallagher has collaborated and performed extensively with a range of Hausu Mountain-affiliated artists like Moth Cockand Tiger Village, and he appeared on Optikk, the latest release from HausMo mainstayKhaki Blazer. Colubrid, his first solo release with Hausu Mountain, opens his extra-terrestrial laboratory for office hours and lets us witness the creation of his technoid hardware sketches as they funnel out from his rig of synthesizers, samplers, and sequencers. Gallagher builds his tracks from bursts of non-recursive drum patterns and atonal anti-melodies, as organic drones spread through his mycelial networks of sound. Like the drippy, tactile pieces that populate his visual art practice, his music exhibits little evidence of the input of humankind as it splashes through the speakers in dollops of amorphous electronic texture and warped patches of idiosyncratic percussion. While some elements of his work call back to the more form-agnostic exports of projects likeAutechre and Mark Fell, Machine Listener’s innate penchant for rhythmic grooves and dub-informed bass voices keeps his music rooted in some semblance of almost danceable beat production. The fact that Gallagher prefers one-take live recordings and chance-based operations speaks to his mastery of his chosen gear and his clear vision in shaping the final product of each of his sessions with little more than preliminary tone programming and hands-on-knobs decision making.