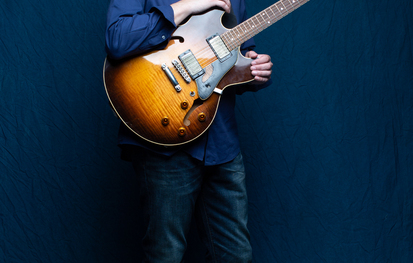 Purcell has spent over 15 years as a member of the military big bands in Washington DC. From 1996-2004, Purcell was the guitarist in the US Air Force premier jazz ensemble, The Airmen of Note. During his time with “The Note," Purcell performed throughout the world including England, Germany, Turkey, Luxembourg, The Azores, Belgium, Oman, Qatar, United Arab Emirates, Italy, Kuwait, and Bahrain. Shawn is currently the guitarist with the Washington DC based US Navy Band “Commodores" jazz ensemble.

As an educator, Purcell currently serves as adjunct professor of jazz studies at George Mason University. He has served on the jazz faculty at Towson University, Middle Tennessee State University, and was a Visiting Lecturer in Jazz Studies at Indiana University, Bloomington, under the direction of David Baker. He has led master classes at major universities throughout the country. He has served on the faculty for The National Jazz Workshop, Maryland Summer Jazz Camp and The National Guitar Workshop. Purcell has also penned educational articles for Jazz Guitar Life, Premier Guitar and DownBeat Magazine. Purcell earned a Bachelor of Science from Duquesne University, a Master of Arts in Music from Middle Tennessee State University and a Doctor of Musical Arts in Jazz Performance from the University of Illinois at Urbana-Champaign.

As a composer/arranger, Purcell’s works have been commissioned by The Chicago Jazz Ensemble, Tito Carillo, Joan Hickey, University of Massachusetts at Amherst, and Texas Tech University and are published by Pro Jazz Charts, Really Good Music, and 3-2 Music. His compositions and arrangements have been performed by The Airmen of Note, US Army Blues, US Navy Band Commodores, Chicago Jazz Ensemble, Steve Fidyk Parlour Project, University of Illinois Concert Jazz Band and Metropolitan Jazz Orchestra to name a few.