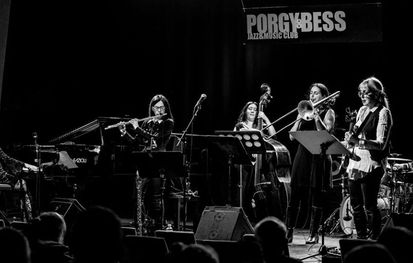 Monika Herzig’s SHEROES, featuring a group of the leading NY instrumentalists, will celebrate their new release, Eternal Dance, which is a collection of music on the theme of healing and overcoming barriers.

Awarded the prestigious Jazz Journalist Association’s “JAZZ HERO” award for the city of Bloomington in 2015, Monika also won the Down Beat Magazine Award, Best Original Song (1994) and has received grants from the NEA, the Indiana Arts Commission and MEIEA, among others. As a Doctor of Music Education at Indiana University, she serves as a Senior Lecturer in Arts Management and has also authored two critically praised books, Dr. David Baker – A Legacy in Music, foreword by Quincy Jones (IU Press 2011) and Experiencing Chick Corea – A Listener’s Companion (Rowman & Littlefield 2017), praised by Wolfgang Knauer at Jazzinstitut Darmstadt, “Herzig manages a perfect balance of musical analysis and context for the chosen recordings as well as Chick Corea’s career…easy to read, well-organized and motivates – which is still the highest achievement for music literature – for repeated listening.”

As an ensemble of empowerment, SHEROES is a musical force, operating with deftness, invention, enthusiasm and ambition. Herzig does much of the writing and arranging, but Regev, Baum, Vincent, and Stern equally contribute compositions alongside covers, including “House of the Rising Sun”and “Ain’t No Mountain High Enough,” prompting Valerie Simpson, its composer, to write “I honestly really, really liked it,” and jazz producer/musician and women in Jazz advocate Terri Lyne Carrington to write “a brilliant project…soulful and thoughtful, it captures the spirit of this group because there’s no stopping great artists from making great music as demonstrated by this stellar recording.”

Praising her bandmates, Herzig says, “These are all incredibly accomplished musicians, often sacrificing other opportunities, family time and resources to perform in this group. They are my idols in terms of tenacity and accomplishment and should be more widely heard and appreciated.” SHEROES not only heralds an era of greater and deeper consideration for women in jazz but as Jazz Journalist Association President, Howard Mandel affirms in his liner notes, “That’s exactly what Monika and company does: Present a model of empowerment with results that are good for everyone. Wherever you are on the gender continuum, you’ll like it. SHEROES make music!”

Jazz critic Bob Blumenthal agrees: “Female musicians are now prominent practitioners on all instruments….Herzig herself is a visionary artist and educator, a true jazz warrior with an already fascinating career.”