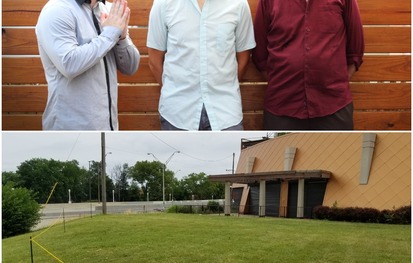 Join us for an outdoor concert featuring Alba Trio! For this event we have fifteen tables generously spaced in our temporary outdoor seating area. Each table is sold for a flat rate of $50 and can accommodate up to four guests. The trio will be set up on our existing patio and will be more than 20 feet from guests. The inside of the club will be closed except for restroom use. Outdoor bar service is available but there will be no dinner service. We encourage you to bring your own food and please consider supporting a local restaurant. Mask required.

Alba Trio is comprised of Tommy Lehman on trumpet (of the Acid Cats and Admirables), Tim Lekan on bass and Anthony Taddeo on drums and percussion (Hey Mavis and Helen Welch). A relatively new trio, the project was started by Anthony Taddeo in 2019 to explore one of his favorite trio formations. The compositions of the group deal greatly with the various nuances of each instrument all while pushing their role in the context of a jazz trio. Taking from the sounds of Miles Davis, Dave Douglas and Avishai Cohen, AlbaTrio is a trumpet trio that brings a diverse and eclectic sound to the jazz idiom.