Billy Coakley "From Every Tribe And Every Nation" Livestream @ BOP STOP 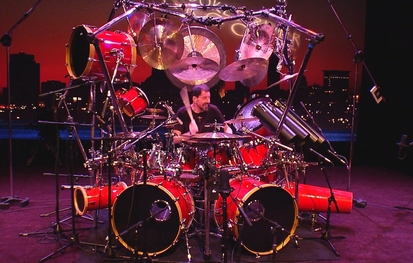 Billy Coakley "From Every Tribe And Every Nation" Livestream @ BOP STOP

We hope you can joing us for a presentation of “From Every Tribe and Every Nation”, a solo drum performance featuring Billy Coakley! This event will be live streamed on BOP STOP's Facebook page. Accessing the stream is free but donations are greatly appreciated and can be made here: https://givebutter.com/billy

From Every Tribe and Every Nation is a wonderfully inspiring, powerful rhythmic musical event that captures the spirit of Billy’s love for drumming and the joy of sharing that love with others.This exciting performance brings the modern drum set to the front of the stage as a solo instrument, featuring original as well as reimagined compositions.

With the use of ostinato (A continually repeated musical phrase or rhythm) Billy creates a rhythmic foundation that allows him to invite the listener into a unique musical world of melodic theme, variation and improvisation. His drum compositions vary from African, Native American, Afro Cuban and Jazz, to Rock and beyond!

Billy’s drum set” The Mothership” Looks like a modern art sculpture that features over twenty one drums and eighteen cymbals and gongs. This amazing drum set generates great excitement and anticipation for the audience, all the while giving Billy plenty of sonic options to “Make A Joyful Noise”! This is an unforgettable concert event you don’t want to miss!

Billy’s professional career as a performer and educator began in the early 80’s playing in a variety of jazz, rock and reggae bands. Billy spent a ten years laying in a popular reggae world beat band called Satta. During that time He released five records and toured non stop through the United States, Europe and Asia. He also appeared in an NBC Movie of the Week, “The Keys”.

Billy is currently in one of Cleveland’s hottest blues and rock power trios Butch Armstrong and the Bearcats. Which along with constant club dates and festivals, has shared the stage with the Allman Brothers, George Thorogood and the Destroyers, Little Feat, Johnny Winter Blue Oyster Cult, Southside Johnny, Robin Trower, The Tower of Power and many others.