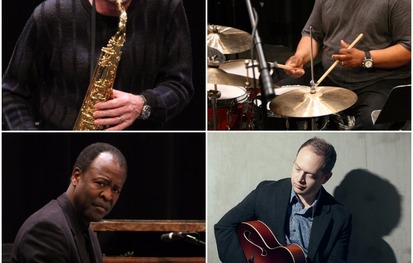 Cleveland based powerhouse quartet, Organ-Ism, livestreams from the BOP STOP on Saturday March 20th at 8pm. To access the stream, visit BOP STOP's Facebook page at showtime. Accessing the stream is free but donations are encouraged and appreciated. They can be made here: https://givebutter.com/organism

Organ-Ism, consisting of Howie Smith on saxophones, David Thomas on organ and Bill Ransom on drums/percussion, was formed in 2007. It was transformed into a quartet with the addition of guitarist Bob Ferrazza in 2011. Its repertoire includes original compositions by members of the group as well as new takes on popular songs by composer/performers of the past fifty years such as Janis Ian, John Lennon/Paul McCartney, Freddie Mercury, Willie Nelson, Paul Simon, and Jimmy Webb.

David Thomas has toured with Dizzy Gillespie, recorded with saxophonist Phil Woods, and has performed with just about every jazz musician in Cleveland. As an educator he has been an instructor at the Cleveland School of the Arts, Cuyahoga Community College, Case Western Reserve University and Cleveland State University.

Bill Ransom has toured and recorded with musicians such as Patrice Rushen, Beth Hart, Marion Meadows, Cecil Bridgewater, Diane Reeves, Mary Wilson and James Newton. For the past several years he has directed Jazz Meets Hip Hop for the Tri-C JazzFest. He is a member of the faculty in the Music Department at Cleveland State University, and is a consultant to both the Shaker Heights school system and Cleveland Music School Settlement.

Bob Ferrazza has appeared regularly in jazz clubs and concert halls around the world with the likes of Donald Byrd, Joey DeFrancesco, Art Farmer, Slide Hampton, Billy Hart, J.J. Johnson, Joe Lovano, Jack McDuff and David “Fathead” Newman. His first recording as leader, Personal, was followed by The Way I Like It and Rare Beauty: Intimate Gems of Duke Ellington on Koch Records, and all have garnered enthusiastic reviews. He is currently director of the Jazz Studies program at the Oberlin Conservatory of Music.