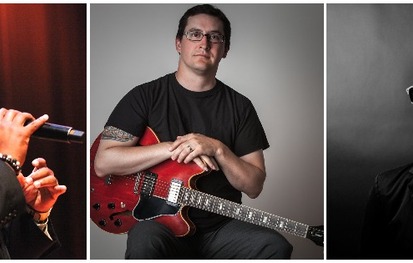 Three mainstays of Cleveland's jazz scene team up for a livestreamed concert to perform their favorite jazz tunes and standards. Featuring:

To access the stream please go to BOP STOP's Facebook page at 7pm on 3/25. Accessing the stream is free but donations are encouraged and can be made here: https://givebutter.com/BBBTrio

Dan Bruce: By embracing the influence of his heroes from the jazz tradition and retaining his own musical personality, guitarist Dan Bruce has developed a unique and impressive musical voice. A recent transplant to Ohio after spending a decade as an important member of Chicago’s vibrant jazz scene, he is active throughout the United States as a performer, recording artist, composer and educator.

Theron Brown: Born and raised in Zanesville, Ohio, Theron currently resides in Akron, Ohio, where he is an adjunct professor of Jazz Piano at Kent State University, and he is immensely involved in promoting jazz and classical music. Theron is also the co-founder and director of the Rubber City Jazz & Blues Festival which takes place annually in Akron, Ohio’s downtown historic district. You can see him regularly performing at many jazz clubs and theaters in northeast Ohio.

Reggie Bowens: Reggie’s gifted art has wrought him an exceptional background over the years, working with accomplished artists such as Bobby McFerrin, Smokie Robinson, Kenny Loggins, and Kim Nazarian, to name a few. After completion of his undergraduate degree program at Washington, D.C.’s Howard University in 2011, he appeared on season three of NBC’s hit a cappella television show “The Sing-Off” as a vocal bass contestant and arranger with Afro-Blue (now Traces of Blue). The group placed fourth out of sixteen a cappella groups from across the globe.