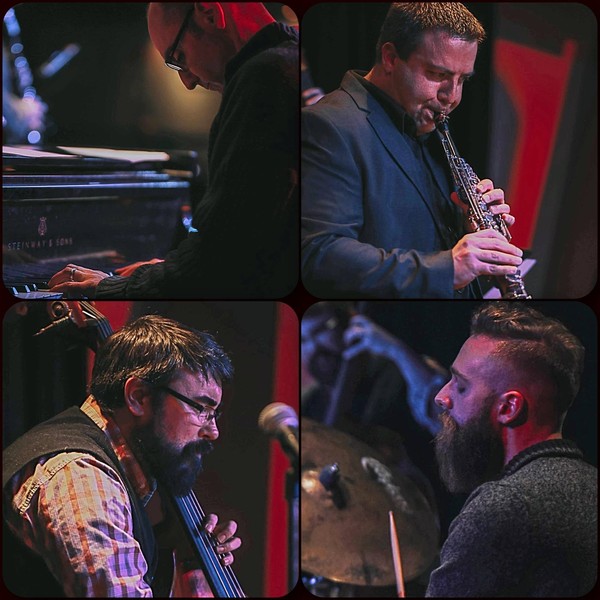 Pulse Quartet features Aidan Plank on bass, Anthony Fuoco on piano, Dustin May on drums, and Brad Wagner on Sax. The band focuses on playing new music with a classic approach of openness and spontaneity. Drawing on diverse influences and the collective experience of the musicians, the music created aims to be uniquely new and grounded in the tradition of the great jazz quartets of the past.

Pulse Quartet will be performing an outdoor concert on July 3rd at 7pm! For this event we have fifteen tables generously spaced in our temporary outdoor seating area. Each table is sold for a flat rate of $60 and can accommodate up to four guests. The band will be set up on our existing patio and will be more than 20 feet from guests. The inside of the club will be closed except for restroom use. Outdoor bar service and limited food menu is available. You are allowed to bring your own food, too. Mask required.

Please order your tickets ahead of time to ensure that we have a table available for you.

Aidan Plank: A native of Oberlin, Ohio, bassist Aidan Plank enjoys performing a diverse range of music throughout Northern Ohio. He studied with bassist and composer David Morgan as well as with Kevin Switalski of the Cleveland Orchestra. Aidan is a graduate of Cleveland State University. Aidan has performed with Dan Wall, Joe Lovano, Judi Silvano, Joe Maneri, Janis Siegel, Frankie Avalon, Tierney Sutton, and many others. Aidan played baroque bass in the premier of Joseph-Nicolas-Pancrace Royer’s Le Pouvoir de l’Amour (composed in 1743) in 2002 at Oberlin College as well as in the world premier of Randall Woolf and Robin Stranahan’s ‘pop-up’ opera Frozen Community, produced by Real Time Opera in 2013. Along with enjoying playing in the Cleveland Jazz Orchestra, Aidan can currently be seen performing explorations of improvisation in duo with guitarist Daniel Lippel. Aidan teaches in the Jazz Studies program at Kent State University, as well as at Cuyahoga Community College’s “Jazz Prep Program”. - http://aidanplank.com/

Brad Wagner is from Akron, Ohio, and has a B.M. in Jazz Studies from the University of Cincinnati’s College-Conservatory of Music. Brad has studied with Rick VanMatre, Brad Goode, Phil DeGreg, John Von Ohlen, Marc Fields, and others. Brad Wagner has been a member of many jazz groups including: Ernie Krivda and the Fat Tuesday Big Band, Moustache Yourself, The Hendectet Jazz Collective, The ABC Trio, Pulse, The Cleveland Jazz Orchestra, The Black Dog Octet, The Cincinnati Contemporary Jazz Orchestra, Sam Blakeslee’s Large Group, and can be seen playing in other jazz groups, pit orchestras, latin, and pop music groups around North East Ohio. Brad plays Soprano, Alto, Tenor, and Baritone saxophones, Flute, Piccolo, Clarinet, Bass Clarinet, and also works as a composer and arranger.

Anthony Fuoco was appointed faculty at Baldwin Wallace University Conservatory of Music in 2005 and has since taught harmony,solfège, keyboard musicianship, piano literature, pedagogy and applied piano. In addition to serving on the BW faculty he has also taught at Lorain County Community College and Cuyahoga Community College. He frequently performs as a jazz pianist in large and small ensembles throughout the Cleveland area and also collaborates with his wife performing the four-hand and two-piano classical repertoire. He earned a Master of Music at the University of Illinois at Champaign-Urbana where he was the recipient of the 21st Century Piano Commission competition. Prior to this, he received a Bachelor of Music at SUNY Potsdam in piano.