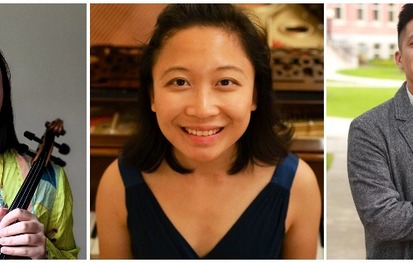 This concert is sponsored by John & Pam Gibbon and Bonnie Baker. Additional support provided by Peter Salaff, Mary Dunbar, and Friends of the BOP STOP.

Con Fuoco: Violinist Ann Yu, cellist Ryan Louie, and pianist April Sun return to their old stomping grounds for a Cleveland reunion to perform a livestreamed concert in front of a live audience featuring Mendelssohn's C Minor Trio, Op. 66, and Paul Schoenfeld's "Cafe Music"--a program filled with bops and heart-stoppers at the BOP STOP. Written in 1845, during the height of Romanticism, the Mendelssohn C minor trio is intensely fiery, poignant, effervescent, and epic. Its bookend movements simmer and sometimes erupt, culminating in a quotation of the "Old Hundredth '' chorale in the finale. Its second movement sings a tender tune with a swing that could easily be imagined as a boat song. and its third zips about like frolicking sprites and fairies. In this trio, Mendelssohn infuses multiple musical flavors into one miraculous work. A hundred years after Mendelssohn wrote his C minor trio, Paul Schoenfeld composed Cafe Music, a three-movement work that, like the Mendelssohn, evokes an amalgam of musical settings. Of the work, Schoenfeld writes:

“The idea to compose Café Music first came to me in 1985 after sitting in one night for the pianist at Murray’s Restaurant in Minneapolis, Minnesota. Murray’s employs a house trio that plays entertaining dinner music in a wide variety of styles. My intention was to write a kind of high-class dinner music – music which could be played at a restaurant, but might also (just barely) find its way into a concert hall."

What better venue for this piece than the BOP STOP, which represents a meeting place between a restaurant and a concert hall? Ann, Ryan, and April look forward to sharing a program of incredible and diverse music with the BOP STOP as its house trio for the night. Tickets to attend in person can be purchased below. This event will also be streamed on BOP STOP's Facebook page at showtime. Accessing the stream is free but donations to the band and venue are encouraged and can be made here: https://givebutter.com/ConFuoco

ANN YU: Praised for her “full-bodied, rich and warm tone” (Cleveland.com), twenty-four year old violinist Ann Yu has captivated audiences with her beautiful sound, sensitive musicality, and engaging performances, drawing inspiration from her faith and her surroundings. A native of Hudson, Ohio, her diverse musical presence is widely recognized throughout the community as she performs in solo and chamber recitals, performs with local orchestras, and teaches. Ann is the 1st prize winner of the 26th Annual Darius Milhaud Competition and has soloed with the CIM Orchestra twice, the Cleveland Orchestra, and the National Repertory Orchestra, among others.

An avid chamber musician, Ann has collaborated with some of the world’s leading artists such as Janine Jansen, Franklin Cohen, Mate Szucs, and Peter Slowik, attended top programs such as the Thy Festival in Denmark, Kneisel Hall, Perlman Music Program Workshop, and the New York String Orchestra Seminar, and studied with members of the Cleveland, Cavani, Juilliard, Mendelssohn, Emerson, and Orion Quartets, among other great masters. She is entering her second year on faculty at the Credo Chamber Music Festival, which she attended as a student for four summers.

Ann’s biggest passion lies in creatively using music to serve the community. She has received grants from the Cuyahoga Arts Council, the Ohio Arts Council, and the Center for Performance and Civic Practice to create unique, community-centered, storytelling projects. She served as the Co-Artistic Director and Communications Director of Renovare Music, a nonprofit string ensemble that uses music to unify Cleveland’s diverse city, performing concerts in diverse settings to honor the marginalized of society through storytelling and non-traditional programming. Currently Ms. Yu is partnered with the Foluké Cultural Arts Center in Cleveland's Central neighborhood to create non-verbal, inter-disciplinary vignettes of the Anansi folktale.

Ms. Yu is a graduate of the Cleveland Institute of Music, receiving her master’s and bachelor’s degree in violin performance studying with Jaime Laredo, Jan Sloman, and William Preucil. She maintains a private studio of violin, viola, and elementary piano students. When not engrossed in musical activities, Ann enjoys exploring the Cuyahoga Valley National Park and the surrounding Metroparks, working on home DIY projects, and falling asleep to a good book.

RYAN LOUIE: Sought-after cellist Ryan Louie enjoys a multi-faceted career as a chamber musician, orchestral player and music educator. Recognized as “a talented cellist who plays both expressively and elegantly, he is innately musical and is cut out to be a musical ambassador.” Ryan has performed throughout Europe, Asia and North America including England, Germany, Holland, Italy, Japan, Korea, Switzerland and Taiwan, in renowned venues such as Alice Tully Hall, Carnegie Hall, Severance Hall, the National Concert Hall of Taipei, and, Japan’s Suntory Hall.

Dedicated to music education, maintains a private studio, and has served on the faculties of St. Norbert College, De Pere, WI, Fine Arts Institute in Green Bay, WI City Music Kids in Cleveland, the Chamber Music Connection in Columbus, and the Aurora School of Music in Aurora, Ohio.

Ryan began studying cello at age ten, earned his bachelor degree in cello performance at Carnegie Mellon University, and his masters degree in cello performance at the Cleveland Institute of Music. He has also studied at the Manhattan School of Music and the Royal Academy of Music in London. His teachers include Mark Kosower, Dr. Melissa Kraut, Anne Martindale Williams, David Premo and Marion Feldman. When not playing the cello, Ryan enjoys following the NBA, spending time with his cats, playing basketball, cooking and collecting rare craft beers. Currently, he is the cellist of the Griffon String Quartet.

APRIL SUN: Boston-based pianist April Sun enjoys a multi-faceted musical life as a performer, educator, and arts organizer, who values curiosity, sincerity, and fun in her work/play. As an avid collaborator, she frequently performs with small ensembles such as the Meadowlark Piano Trio, Phoenix and the Cape Cod Chamber Orchestraand has spent summers at Toronto Summer Music Festival, Caroga Lake Music Festival, Garth Newel Music Festival, and the Orford Center for the Arts.

April invests in helping diverse communities forge meaningful relationships with music, which she considers a social good. As a cultural organizer, she co-directs Music for Food, a nonprofit that uses music to generate funds for food pantries. April also volunteers with Asian Musical Voices of America to build community among self-identified AAPI "classical musicians." From 2016-2018, April was an Artist-in-Residence at Judson Park where she played monthly concerts for seniors as part of an internationally recognized intergenerational living initiative. She teaches piano and chamber music at the Brookline Music School and serves as a collaborative pianist at New England Conservatory and Boston University.

April holds a Doctorate of Musical Arts in collaborative piano from the Cleveland Institute of Music, which also granted her an M.M. in piano performance, a certificate in pedagogy, and the Bennett Levine Chamber Music Award. She completed her B.A. in music, with minors in English and Art History, at the University of Nebraska--Lincoln. Her many wonderful mentors have included Daniel Shapiro, Anita Pontremoli, Paul Barnes, Kim Kashkashian, Peter Salaff, Hyeyung Yoon, Francesca Brittan, and Susan McClary.

April was born and raised in Bozeman, MT and lived in GA, SD, NE, and OH before moving to MA, where she is surrounded by people and other animals she adores. Away from the piano, she fills time with stories, bikes, strong beverages, and hikes.