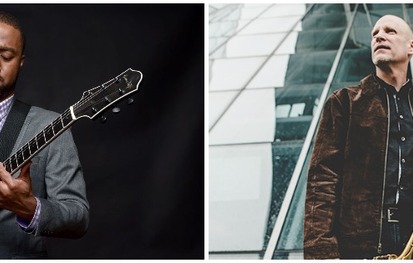 Bobby Selvaggio is not only one of the leading alto saxophone voices on the contemporary jazz scene, he's also one of its most incisive interviewers. Bobby takes the stage for conversation and a performance with Akron based guitarist Dan Wilson to talk about influences, inspirations, and his latest project 'Vessels of Wood and Earth' as part of the new podcast Jazz and Conversation presented by The BOP STOP. Tickets to attend this show in person are $15 each. This event will also be livestreamed on BOP STOP's Facebook page at showtime. Accessing the stream is free but donations are encouraged and can be made at www.givebutter.com/BobbyAndDan

Dan has been touring nationally and internationally with three-time Grammy nominated jazz organ legend, Joey DeFrancesco. Dan's composition, "Who Shot John" was featured on Joey's 2015 release, "Trip Mode." Dan received a Grammy nomination for work on "Project Freedom," by Joey Defrancesco & The People, released in 2017. Dan can also be heard on Van Morrison's "You're Driving Me Crazy," and "The Prophet Speaks." In April of 2017, Dan joined legendary bassist Christian Mcbride's "Tip City." In June of 2019, Dan recorded an album for Mack Avenue Records entitled "Vessels of Wood and Earth," which featured Jeff "Tain" Watts, Christian Sands, Marco Panascia, and Joy Brown. The album was released during the Fall of 2019.