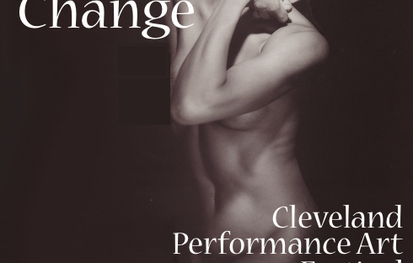 Thomas Mulready of This Analog World presents a presentation of (*)Everything Is Subject to Radical Change: Cleveland Performance Art Festival Revisited on September 17th, 2021:

The presentation will conclude with a musical concert by special guests Vanity Crash.

In late 1987, Thomas Mulready founded the Cleveland Performance Art Festival as a project of Cleveland Public Theatre. Three years later, amidst media controversy over art censorship and investigations by the vice squad, Mulready formed a separate 501(c)3 non-profit and continued presenting the annual international festival until 1999, with a final festival in 2003.

The annual Cleveland Performance Art Festival grew from a 6-night non-curated program in 1988 to the largest festival of its kind in the world, at one point encompassing 12 weeks per year, and eventually presenting over 1000 artists from 23 countries.

Impossible to define, performance art took inspiration from 60's Happenings, the Fluxus movement, futurist productions, Dada cabaret, guerrilla theatre, endurance art, butoh and religious ceremony, and by the 1980's had become a safe space for multi-disciplinary artists to critique issues of gender, politics, sexuality, race, and the body, often in a provocative, confrontational or transgressive manner.

The PAF was programmed by a panel of regional and international curators and collaborators, and developed a reputation for a rigorous aesthetic, artistic risk taking, and community engagement, with dozens of partner organizations and venues participating across the region. The Performance Open was reserved for any applying artist able to travel to Cleveland, and audience discussion with artists took place after every performance.

Everything Is Subject to Radical Change: Cleveland Performance Art Festival Revisited is hosted by Thomas Mulready and consists of rare extant photos and video of live performances presented at the PAF, plus video interviews with performance artists, authors, researchers, panelists, partners, educators and audience who engaged with the PAF over the years. The video clips include footage and assets sourced from the Cleveland Performance Art Festival Archives housed at the Kelvin Smith Library Special Collections at Case Western Reserve University.

Vanity Crash are known for their outrageous live glam punk presentations featuring mesmerizing light shows, video projections and glamorous looks presenting their dark, edgy riffs and synched grooves. The band, consisting of Dennis Van Crash on lead vocals and guitar, Virginia Plain Crash on vocals and percussion, Matthew Angel on lead guitar and Thomas Anonymous on drums and vocals, took advantage of the lockdown to upgrade their tech, jack into the network and discover new ways to make new sounds.

"Your festival has become, in its short history, very important, both regionally and nationally. The range in diversity in your festival gave new meaning to multiculturalism, as you presented a wide and divergent range of racial, ethnic, cultural, political and sexual issues all within your rigorous aesthetic focus... I hope that I can learn to replicate some of that in Minneapolis." -- John Killacky, Walker Art Center, Minneapolis

For those unable to attend the event in person, livestream tickets are available for the show at https://www.showtix4u.com/events/thisanalogworld