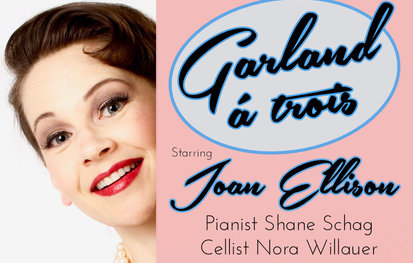 Songstress Joan Ellison, with pianist Shane Schag and cellist Nora Willauer, celebrates Judy Garland’s centennial with a trolley ride through her life, from her swing-singing days at MGM to her take no prisoners sold-out concerts around the globe. It's a highly personal love letter to the genius of Judy Garland, including The Trolley Song, Over the Rainbow, Just in Time, If Love Were All, The Boy Next Door, I Got Rhythm, By Myself, The Man That Got Away, The Palace Medley, and Get Happy.

“Another highlight…is Joan Ellison’s wondrous performance of ‘Over the Rainbow.’ Her voice strong and clear,…Ellison gives a master class in interpretation. Painting a picture with her talent and emotion, Ellison’s irresistible performance inspires an electric reaction from the crowd.” —New Jersey Stage

In addition to in person seating, this event will be livestreamed on BOP STOP's Facebook page at showtime. Accessing the stream is free but donations can be made at www.givebutter.com/JoanEllison