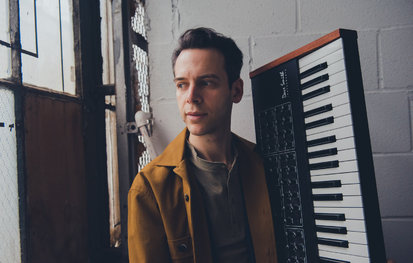 Celebrating the one-year anniversary of his acclaimed album Resilience, Brooklyn-based pianist & composer Jesse Fischer is overjoyed to make his Bop Stop debut. Released in the midst of the pandemic, Resilience is a powerful statement of joy and strength in the face of adversity, and explores the connections between groove-based modern jazz, music of the African diaspora, and Jesse’s own Jewish heritage.

Called “One of the best jazz albums of the summer of 2020” (PostGenre), Resilience has garnered many accolades including Jazzwise Video of the Day, Jazziz Weekly Discover playlist, Apple Music Jazz Currents and On the Corner playlists, and SoulandJazz.com Jazz Album of the Week, as well as 75k Spotify streams to date. Glide Magazine wrote, “Fischer dazzles, coaxing supportive, harmonic and surprising notes from his arsenal of keyboards and synths… a riveting, oft-breathtaking listen.”

For this performance, Jesse brings his dynamic quartet, featuring saxophonist Yacine Boularès, bassist Dan Winshall, and drummer Jerome Jennings, and will be performing selections from Resilience, as well as a few of his signature re-imaginings of 60’s & 70’s jazz repertoire, as recorded on his Flipped and Vein Melter projects.

Jesse Fischer is a Brooklyn-based pianist, composer, and producer. Known for his warm, soulful touch and emphasis on melody, groove, storytelling and emotion, his unique voice combines elements of his own Jewish heritage with music of the African diaspora, jazz, hiphop, indie, and singer-songwriter genres. A three-time ASCAP Plus Award winner, Fischer has performed with many notables in the jazz, pop, and world music scenes, including Becca Stevens, Sarah Elizabeth Charles, Mino Cinélu, Grace Kelly, Lakecia Benjamin, and Deva Mahal. He has released several records as a leader, most recently Resilience (self-released, 2020), and the Herbie Hancock/Head Hunters tribute Vein Melter (Tru Thoughts, 2015), created jointly with producer/multi-instrumentalist Sly5thAve. He is also a core member of the groundbreaking Brooklyn Afro-pop/jazz fusion collective Ajoyo and producer & engineer of their sophomore release, War Chant.

Fischer has brought his unique voice as a composer and bandleader to stages around the world. With over 1.3 million plays on Spotify to date, his music has been featured on Spotify’s flagship editorial playlists like State of Jazz, Butter, and Fresh Finds, Apple Music’s playlists Jazz Currents and On the Corner, as well as taste-making radio shows from Gilles Peterson (BBC Radio 6), Anthony Valadez & Jeremy Sole (KCRW), legendary bassist/producer Marcus Miller (Sirius/XM) and Wicked Jazz Sounds (Amsterdam).

Ever prolific and versatile, Fischer also has many years’ experience as a producer and songwriter in the indie-pop, soul, and singer-songwriter genres. Fischer’s credits as a producer, engineer, and songwriter include Jasmine Cephas Jones, Samora Pinderhughes, Braxton Cook, Justin Brown, BIGYUKI, Morgan James and many others. Fischer’s remixes for artists such as Emily King, Gregory Porter, and Hiatus Kaiyote have been spun on dancefloors and parties all across the globe, from Singapore to Amsterdam to Cape Town. He is also a passionate educator with experience teaching music and music production to young people of all ages, in both a private and classroom setting.