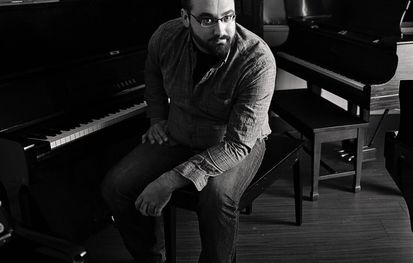 Philadelphia based pianist, Joe Kenney, brings his band to BOP STOP for their BOP STOP debut! Tickets to attend this show in person are $15. This event will also be livestreamed on the BOP STOP's Facebook page at showtime. Accessing the stream is free but donations are appreciated and encouraged and can be made at www.givebutter.com/JoeKenney
----------------
Joe Kenney Band blends cool jazz fusion with a distinctive, dynamic energy, as they present captivating originals and distinctly exciting arrangements of contemporary tunes.


Joe Kenney -- a graduate of West Chester University of Pennsylvania with a B.M. in piano performance (2013) -- is a recording artist, songwriter, and pianist from Philadelphia. The music on Kenney's four albums and various collaborations span multiple genres, and are reflective of a cohesive blending of classical music theory, jazz fusion, rock, soul, and hip-hop idioms. Joe has garnered praise for both his original compositions and cover arrangements.

Following the success of the first two solo piano albums, Joe expanded into different formats, working with a full band and honing in on a jazz fusion sound, while retaining the classically informed harmonies from his first two albums.

Amidst an active performing and recording schedule with several bands and collaborators, Kenney's latest undertaking has been the recording and unveiling of his fourth album, which features six highly decorated vocal artists from the Philadelphia area, on a ten-track original album that has music geared towards markets that cross multiple musical styles. The first single, Another Side (Ft. Joy Ike), released on May 8th, 2020, and was premiered by Neon Music (UK) with a glowing review. It was also featured on The Key/WXPN and selected as the Philly Local pick by highly popular radio personality Helen Leicht. The next two releases, All's Not Lost (Ft. Laura Lizcano) and Gone (Ft Aaron Parnell Brown) were also met with spectacular reviews.

On October 23rd 2020, the full album, Forth, was released to all platforms. It won a Bronze Medal in the Global Music Awards and has been featured on over 85 Radio Stations in U.S. and Canada.