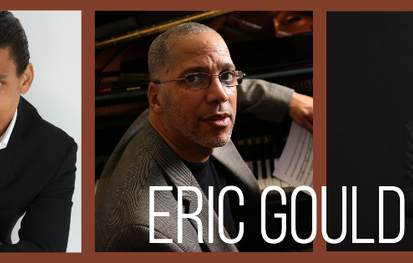 On Friday October 29th and Saturday October 30th, the Eric Gould Trio featuring Leon Lee Dorsey on bass, Yoron Israel on drums, and Eric Gould on piano will record a live concert at the BOP STOP! Come be a part of jazz history in the making! Tickets to attend in person are $25 each. This event will also be livestreamed on BOP STOP's Facebook page at showtime. Accessing the stream is free but donations are encouraged and appreciated and can be made at https://givebutter.com/EricGouldTrio

Eric Gould is well known to Cleveland audiences, and has released three top ten CD’s on national jazz radio. He is a professor of piano and the former Chair of Jazz Composition at Berklee College of Music.

Yoron Israel is Chair of Percussion at Berklee. He is a native Chicagoan and is one of the most gifted and sought-after musicians of his generation. In addition to leading his various projects as a bandleader. Yoron’s brilliant musicality, intensity, and versatility are appreciated worldwide, through consistent performances at prestigious concerts, notable festivals, and prominent clubs as well as on more than 200 recordings as an accompanist. Yoron has performed or recorded with Sonny Rollins, Abbey Lincoln, Ahmad Jamal, Horace Silver, Tony Bennett, and many others.

Leon Lee Dorsey is an Assistant Professor of Jazz Composition at Berklee and he has released four top 50 recordings in the last two years, including two in the top ten. His recording with piano great Harold Mabern (Mabern’s last recording before his death) received 4 stars in DownBeat magazine. A composer and arranger, he has performed with jazz luminaries that include: Dizzy Gillespie, Wynton Marsalis, Freddie Hubbard, John Lewis, Kenny Clarke, Jon Hendricks, Gloria Lynn, and Harry “Sweets” Edison.