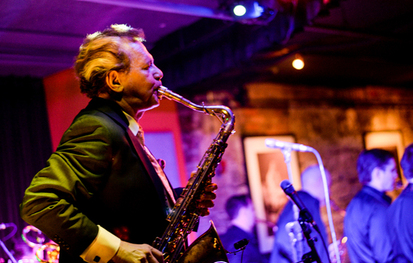 Join us as Ernie Krivda's Fat Tuesday Big Band teams up with three of Cleveland's finest vocalists including Evelyn Wright, Mike Cady and Erin Keckan, to honor the music of the great American songbook. Tickets to attend in person are $15 each. This concert will also be livestreamed on BOP STOP's Facebook page at showtime. Accessing the stream is free but donations are encouraged and can be made at www.givebutter.com/FTBB

Whether in concert or playing swinging dance music, Ernie Krivda and The Fat Tuesday Big Band are one of the most exciting and engaging acts to hit the Midwest music scene in recent memory. The band reflects the electric intensity of their leader as well as his superb musicianship and stylistic distinction. Combining the musical values of the great big bands of yesterday with the dramatic energy of a new century, the nineteen piece “Band That Swings” plays each performance into an unforgettable event.

The Fat Tuesday Big Band features an explosive chemistry, mixing consummate veteran talent with rising starts. Their newest CD (Body & Soul) features the talents of the new vocal sensation Erin Kufel. The addition of her strong vocal component is part of the continuing expansion of the bands expressive range. To partner with its signature “joie de vive”, the Fat Tuesday Big Band’s ballad style has evolved and matured, in its thirteen plus years, into a powerful and moving experience.

The audiences of Northeast Ohio consider the FTBB to be a treasure. Their feeling is based on more than just regional pride, as they have had the opportunity to compare them, on a number of occasions, to some of the great bands of the day. A resurgence of the “battle of the bands” marketing concept has found them representing the area in duels with Roger Humphries' swinging Pittsburgh band, George Gee’s polished New York City aggregation, and the great Count Basie Orchestra. The Fat Tuesday Big Band has always been able to successfully defend its turf. Great musicianship, stylish distinction, and transcendent energy are a hard combination to beat.