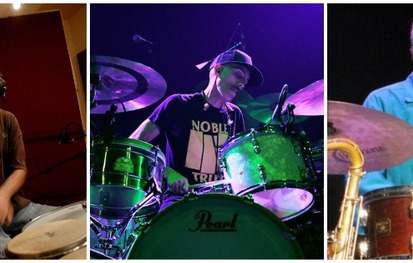 Three prolific drummers, Joe Tomino, Carmen Castaldi, and Leland Scott Davis join forces for a drum extravaganza. In addition to in person ticket sales, this event will be streamed on BOP STOP's Facebook page at showtime. Accessing the stream is free but donations to the band and the venue are appreciated and can be made here: https://givebutter.com/DrumTrio

Joe Tomino is a Cleveland based musician, producer, yoga instructor, and plant-based chef. Joe discovered his love of music at a young age through listening to his parents’ record collection and watching too much MTV. Throughout his youth, Joe played everything from punk rock, dancehall reggae, orchestral, experimental techno, and big band music. This led him to study classical composition and jazz percussion at New England Conservatory and Cleveland State University.

Joe currently spends most of his time writing and performing with his bands; Dub Trio, Birth, Togishi, and Yellowstone Apocalypse. When he’s not sitting behind a set of drums, Joe enjoys headstands, single-origin- washed-processed coffee, books about anatomy, forest bathing, homemade kombucha, and being a dad.

A gifted jazz drummer, Cleveland's Carmen Castaldi emerged in the 1970s, and spent decades as a highly sought-after sideman, working on the West Coast with artists like longtime associate Joe Lovano, Frank Strazzeri, and Keely Smith. In 2019, he paired with Lovano and pianist Marilyn Crispell for Trio Tapestry.

Raised in Cleveland, Ohio, Castaldi started playing jazz drums in his youth. After high school, he honed his skills at Boston's Berklee School of Music, where he attended alongside fellow Cleveland native, saxophonist Joe Lovano. There he studied with noted performer/instructors Joe Hunt, Alan Dawson, and Ed Bobick. Graduating in 1974, he moved to Las Vegas and spent much of the next decade working with artists like Keely Smith, Don Rickles, and Sonny Stitt. Relocating to Los Angeles, he continued to find performance opportunities, working with a bevy of West Coast luminaries including Teddy Edwards, Bill Perkins, Frank Strazzeri, and Herb Jeffries. During this period, he was also a member of the Bob Gail Orchestra.

Over the years, he also stayed in touch with Lovano, working with the acclaimed saxophonist on gigs at Los Angeles' the Jazz Bakery (with trumpeter Tim Hagans), the San Diego Jazz Festival, and New York's the Knitting Factory (with pianist Kenny Werner). In the mid-'90s, Castaldi returned to Cleveland, where he led his own groups and continued his association with Lovano, appearing on 2002's Joe Lovano: Viva Caruso. In 2019, he joined the saxophonist and pianist Marilyn Crispell for the ECM date Trio Tapestry.

LSD created the Science of Intuitive Generating Structures for Improvisation and The Universal Tempo Scale for use in workshops and performance. These methods can be heard in his various groups and collaborations including the Myth Spirit Orchestra and solo recordings soon available via bandcamp.