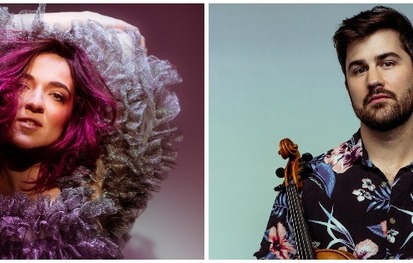 We are thrilled to present Becca Stevens and Nathan Schram in a very special duo performance on Monday November 8th at 7pm Tickets to attend this show in person are $20 each.

GRAMMY-nominated, Brooklyn based and North Carolina bred Becca Stevens has established an outstanding career blending her effortless vocal talent with exquisite compositions that draw inspiration from pop, jazz, indie-rock, and traditional Appalachian folk music. Her most recent album, WONDERBLOOM (GroundUP ’20), which she produced and engineered with Nic Hard, displays Stevens’ skill of laying profound and discerning lyrics over funky and dance-ready beats in a record that Jazz Magazine described as “sophisticated and sensual pop” and The Mail on Sunday, as “Glamorous… semi-electric pop Prince might approve of”.

“Slow Burn” from WONDERBLOOM was nominated for a GRAMMY for Best Arrangement, Instrumental and Vocals in 2020.

Hailed by the New York Times as an “elegant soloist” with a sound “devotional with its liquid intensity,” Nathan is a GRAMMY Award-winning composer, entrepreneur, and violist of the Attacca Quartet. Nathan has collaborated with many of the great artists of today including Björk, James Blake, Sting, David Crosby, Becca Stevens, David Byrne, Trey Anastasio, Itzhak Perlman, Joshua Bell, Simon Rattle, and others. He has premiered music by Steve Reich, Nico Muhly, Timo Andres, Elliot Cole and Gabriel Kahane.

Nathan is the Founder and Artistic Director of Musicambia, a non-profit organization bringing music education and ensemble performance to the prisons and jails of the United States. Nathan is also a violist in the Affiliate Ensemble of Carnegie Hall, Decoda and an Honorary Ambassador to the city of Chuncheon, South Korea.