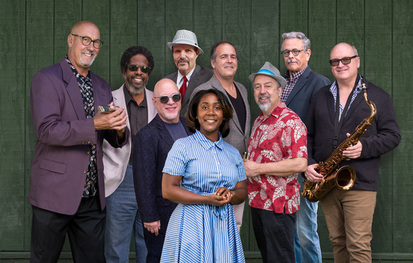 Blue Lunch returns to BOP STOP with special guest, Billy Price, for a live concert which will also be livestreamed. Tickets to attend in person are $20 each. Accessing the stream is free on BOP STOP's Facebook page at showtime but donations are greatly appreciated and can be made at www.givebutter.com/BlueLunchBand

Blue Lunch is a 9 piece band with a 3 piece horn section that has been playing its eclectic mix of blues, soul, jazz, and rhythm and blues at festivals, clubs, private events, and a variety of outdoor venues throughout the region for over 36 years. Blue Lunch is unique in its use of multiple vocalists and harmony vocals. The band has also produced 8 CDs to date, including "Saxophone Shootout, Live at Nighttown" which placed in the top 5 Self-Produced CDs in the International Blues Challenge in Memphis.

The band has performed multiple times over the years at the Bop Stop, including a sold out show behind the club to kick off the summer of 2021, overlooking scenic Route 2! The band is always evolving, and in the last year has added soulful 27 year old vocalist Maya Nicholson, along with equally soulful, recent Florida transplant, Billy Seward on guitar and vocals.

2016 Blues Music Award (BMA) Winner and two-time 2020 BMA nominee Billy Price first attracted national attention during his three-year association with guitarist Roy Buchanan. Price is the vocalist on two of Buchanan's LPs, That's What I'm Here For and Live Stock. Since then, with the Keystone Rhythm Band, the Billy Price Band, and solo projects, Billy Price has recorded and released a total of 17 albums, CDs, and DVDs.