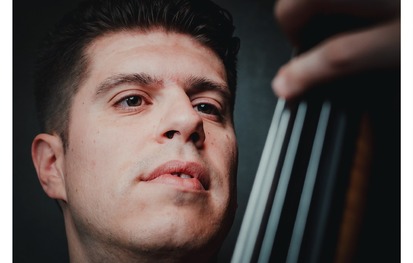 The Kevin Robert Martinez Trio is a vehicle for exploring standard jazz repertoire with a focus on interaction and feel.

*All guests, staff, and performers must show proof of vaccination or produce a negative test result within 72 hours of entering to be admitted to a show. For FAQ's regarding this policy please click here.
--------------------
Tickets to attend the show in person are $15 each. The concert will also be livestreamed on BOP STOP's Facebook page at showtime. Accessing the stream is free but donations are encouraged and can be made at www.givebutter.com/KevinRobertMartinez.

A native of Northampton Ohio, Kevin grew up in a home filled with music. In 2001 Kevin moved to Chicago, where he earned a BA in Music Performance from Columbia College Chicago (2005) and a Master’s of Music Composition from DePaul University. He spent the entirety of his time there immersed in that city’s unique jazz scene but also branched out, touring nationally with the Chicago Afrobeat Project. Since returning to Northeast Ohio in 2010 Kevin has recorded with Chris Coles, The Speedbumps, Roger Hoover, and Honeybucket, among others. In addition to performing and recording Kevin is also working in new music for his original project Reclamation Band.

Joey Skoch is a jazz pianist and keyboardist. He received a Master's Degree from DePaul University, where he studied with Ron Perrillo. Joey graduated from Capital University where he studied both jazz and classical piano with professors Mark Flugge and Seymour Fink. While currently residing in Cleveland, Joey continues to have the opportunity to perform with some of the world's greatest musicians in Chicago including Bobby Broom, George Fludas, Dennis Carroll, and Pharez Whitted. He has also performed with Dee Alexander and the Chicago Jazz Orchestra and performs weekly at Andy's Jazz Club.