Amanda Powell and Friends Present: All Together Now @ BOP STOP 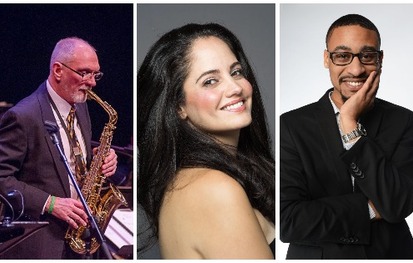 Amanda Powell and Friends Present: All Together Now @ BOP STOP

We welcome you to join us as Amanda Powell and Friends Present: All Together Now. Tickets to attend in person are $20 each or tune in to the BOP STOP's Facebook page at showtime to catch the livestream. Donations towards the livestream can be made at www.givebutter.com/AmandaPowell.

Join us for a cozy musical gathering that will include favorite holiday songs, blues, jazz, folk songs and more. Stories and music will be wrapped in Amanda's signature invitation to sing-along and join the musicians on a connective journey. Featuring:

AMANDA POWELL, soprano, has been praised as “the star of the evening” (Seen and Heard International, UK) and "charismatic and theatrically arresting” (San Francisco Chronicle). A highly versatile musician, she is at home in repertoire from Monteverdi to Mozart to Ravel, and has toured internationally as soloist in baroque opera, oratorio, and crossover folk programs. Her tour performances with GRAMMY-winning baroque orchestra Apollo's Fire (Jeannette Sorrell) include such venues as the National Concert Hall of Ireland in Dublin, the Irish National Opera House, the Aldeburgh Festival (UK), the Metropolitan Museum in New York, the National Gallery in Washington, and Zellerbach Hall in San Francisco, among others. Her 2019 debut as Messiah soloist with the Calgary Symphony won kudos as "the soloist of the night... singing to perfection."

As a recording artist, Ms Powell has been featured on several Apollo's Fire albums including Sugarloaf Mountain, Sephardic Journey, and Christmas on Sugarloaf Mountain, all of which received rave reviews on both sides of the Atlantic and debuted in the top ten on the BILLBOARD Classical Chart. Her 2015 solo debut album, Beyond Boundaries, is an intimate program of folk, jazz, and global music. She is a fluent improvisor and has collaborated with such artists as Bobby McFerrin and Sheila Jordan.