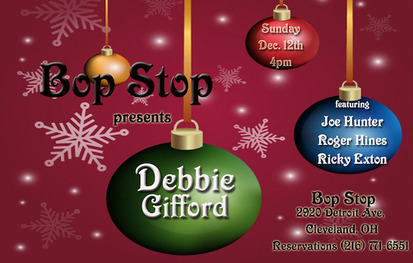 Tickets to attend the concert are $15 each. This event will also be livestreamed on BOP STOP's Facebook page at showtime. Accessing the stream is free but donations are encouraged and can be made at www.givebutter.com/DebbieGifford.

“Gifford’s voice is both smooth and engulfing, wrapping itself around every note and mesmerizing the listener with subtle charm. Her sensual style of phrasing and timing are the very essence of her creativity. Debbie is spellbinding - she holds the audience in the palm of her hand” -LA Jazz Scene Magazine

Debbie Gifford, vocalist, composer & lyricist, has been nominated “Jazz Musician of the Year, “Jazz Band of the Year”, and “Vocalist of the Year” in the Annual Free Times Music Awards. Her first solo performance was at age 4 and she continued her love of music in performance and education by earning a Bachelor of Science in Music Education and a Masters of Music in Vocal Performance at Cleveland State University. Launching her international notoriety in 2004, Gifford has continued to perform annually at festival, club and concert venues in Europe, Canada, Asia and the USA. A partial listing of Debbie’s worldwide performance venues include: France; "Annual Festival International de Musique en Catalogne – Ceret”, Italy; Rome: Foundazione Adkins Chiti “Donne in Musica: ControCanto -Donne in Jazz” Concert Series, Palermo: Villa Filippina in Jazz, Porticello: Festival of Jazz, Ustica: The Alianto Club Jazz Festival, Cefalu: Summer Jazz Fest & Taormina: Metropole Jazz Nights. Asia; JZ Jazz Concert Series Shanghai Cultural Arts Center, JZ Jazz Clubs - Shanghai & Hangzhou. She has shared the stage with jazz greats: Marcus Belgrave, Bobby Watson, Joe Lovano, Sherrie Maricle and Dominick Farinacci. She is the only woman singer to perform with the Birdland Big Band, under the director of Tommy Igoe, at the famous Birdland Jazz Club, New York. Debbie’s discography includes: “You Taught My Heart to Sing”, “So Many Songs About Love”, Double Live CD set “Open Airs” recorded live at the Palace of the King of Majorca, France , "One Day At A Time" - all original music written by songwriting team Debbie Gifford & John Trzcinski. Gifford’s latest CD Release is “Changes” is a compilation of Pop favorites & Jazz standards with a new twist. www.debbiegifford.com

Joe Hunter, a first-call pianist for many local, national, and international acts. He has established himself as one of the cornerstones of the Cleveland & Columbus jazz circuits. Growing up in a musical household, Cleveland Heights native Joe Hunter began playing piano when he was just eight years old. His parents would take him to venerable Cleveland jazz venues to experience performances by some of the top musicians of the day. Hunter expanded his musical skills in jazz ensemble and orchestra at Heights High. At Cleveland State University, he studied classical music and as a student in Rio de Janeiro, his passion for Brazilian music was ignited. He has been recognized for his love of the American songbook and its relationship to the spirit of jazz. Joe has been playing piano professionally since 1978 and his versatility has garnered him work with an array of artists. He has performed with many national artist including Conti Condoli, Tito Puente, and Scott Hamilton. Hunter has been playing music full time, as a solo artist and with various bands since the late 1980s. From 1998-2020 he taught on the Faculty of Jazz Studies at Cuyahoga Community College. Over the course of his career, Hunter has released three albums. His latest is called Sweet and Lovely, and it features Hunter on piano, Roy King on drums, and Demetrious Steinmetz on bass, as well as a string section that includes violins, viola and cello.

Roger Hines, bassist, has logged many miles on the road during his 30 year career as a musician. From 1980-1987 Roger toured and recorded exclusively as bassist for legendary singer Ray Charles. This close relationship with “The Genius of Soul” continued until Brother Ray’s passing in 2004. Hines also toured as musical director and bassist for Grammy Award-winning jazz vocalist Diane Schuur from 1988 to present. He teamed up with Ms. Schuur as an artist in residence and educational clinician at many colleges and other educational venues throughout the U.S. and abroad. Hines has also performed with many other well-known artists and ensembles including Louie Bellson, the Cab Calloway Orchestra, Ann Hampton Callaway, Johnny Coles, the Count Basie Orchestra, Rosemary Clooney, Eddie Daniels, Billy Eckstine, the Duke Ellington Orchestra, Frank Foster, Sir Roland Hanna, Eddie Jefferson, Hank Marr, Zoot Sims, and Ernie Watts. In addition to performing, Roger also taught bass at the Ohio State University School of Music as a jazz studies faculty member for many years. He is currently a professor in the Conservatory of Music at Capital University. Roger received a B.M. in Music Theory/Composition and a M.A. in String Pedagogy from The Ohio State University.

Ricky Exton, drummer, recording artist, composer, arranger, and producer, has been active in the music community for over 2 decades. At an early age, Ricky’s talents emerged as one of the Cleveland Tri C All Stars. He continued his career in music at Berklee College of Music in Boston, Mass., where he earned a Baccalaureate in Professional Music. His performance venues include jazz festivals, concerts, television appearances, and private and corporate events. He has performed with Lou Rawls, Wynton Maralis, Rufus Reid, Terence Blanchard, Ernie Krivda, Cyrus Chestnut, Joanne Brackeen, Dominick Farinacci, and international guitar virtuoso Neil Zaza. In addition, Ricky is an active session musician recording in studios from the east coast to the west coast.