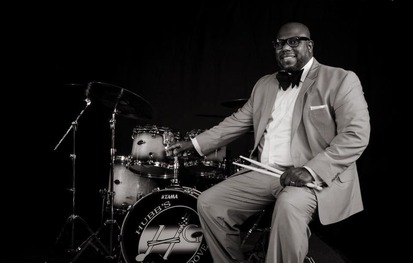 Celebrate the holiday spirit with one of Cleveland's favorite and in-demand bands, Hubb's Groove! Tickets to attend this show in person are $25 each. This concert will also be livestreamed on BOP STOP's Facebook page at showtime. Accessing the stream is free but donations are encouraged and can be made at www.givebutter.com/RobertHubbard

Robert Hubbard, Jr. was born in Cleveland, Ohio to Robert and Virginia Hubbard. At the age of 5, Robert began to play drums in his father's church. He began his preparatory studies at the Cleveland Music Settlement , John Hay High School was later accepted into the Cleveland School of the Arts (CSA) with Frank McComb, Avant, Conya Doss, Jason Champion and Lafayette Carthon II. During his junior and senior years he was recognized at the Tri-C Jazz Fest as the top high school jazz drummer in the state of Ohio. Also in his senior year he was awarded the honor with his trio as second top high school jazz trio in the nation, second only to Roy Hargrove, Dallas Arts Magnet school, by Downbeat magazine. After graduating from CSA, Robert attended Jarvis Christian College in Texas. Robert began his music career playing with local artists throughout Greater Cleveland. His first major tour began in 1993 with R&B group Men At Large, in which he appeared on the Arsenio Hall television show. Later, he toured with the hit production play, "A Good Man is Hard to Find" and “Will A Real Man Please Stand Up.” His touring and performing career also consisted of him playing for artists such as Changing Faces, Gerald Albright, Sean Jones and many more. Additionally he played for gospel artists, Keith Moncrief and The Gospel Family and Walter and Tramaine Hawkins. Robert started his own band, Moments Notice in 1996 who opened up for the late Wayman Tisdale, Roy Ayers, Marion Meadows, Yellow Jackets, Earth Wind & Fire, James Carter and Randy Crawford.

In 2000, Robert began producing from "Studio 89," a studio birthed from him and his brothers, in which he is the chief engineer. Robert has produced local artists and choirs throughout Greater Cleveland. He taught at the Christian Music Academy for three years and after several years of private teaching began teaching at the Hubbard School of Music and Fine Arts in 2005.