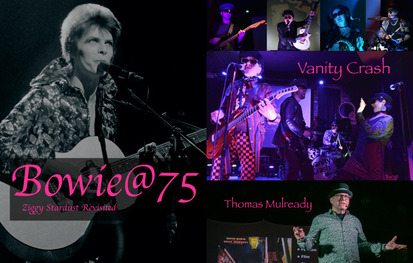 Cultural archeologist and avant-garde impresario Thomas Mulready teams up with glam punk superstars Vanity Crash to celebrate what would have been David Bowie’s 75th birthday by revisiting the artist’s pivotal Ziggy Stardust tour, character, music and backstory in a unique, multi-media extravaganza.

The show features live original music and Bowie classics alternating with exclusive interviews conducted with members of the Spiders From Mars, Bowie’s hard rocking outfit during his Ziggy Stardust period. Drummer Woody Woodmansey and pianist Mike Garson were captured discussing their work with Bowie throughout the most explosive period in his long career. Woodmansey lived with Bowie and his American wife Angie in Haddon Hall in Beckenham starting in April, 1970, rehearsing what would become the album The Man Who Sold The World.

The Hunky Dory album followed, but fame did not find David Bowie until the middle of The Ziggy Stardust Tour, which began in front of a few dozen fans in January, 1972 in a pub in Aylesbury, England. On September 22, Bowie and The Spiders performed in the US for the first time for 3000 fans at a sold-out show at Music Hall in Cleveland, Ohio, marking pianist Mike Garson’s debut with the band, who performed with Bowie on recordings and in performance, right up to Bowie’s final public event in 2006.

Less than two months after his US debut, Bowie returned to sell out two shows of 10,000 each at Cleveland’s Public Hall. The tour continued to the UK, back the US, to Japan, and back to England, when Bowie, by now an international superstar, officially announced his retirement from live performance at the Hammersmith Odeon on July 3, 1973, less than 18 months since the start of the tour. It was Woodmansey’s final performance with Bowie.

The Ziggy Stardust character, however, lived on through the albums The Rise and Fall of Ziggy Stardust and The Spiders From Mars, Aladdin Sane, Pin Ups, and Diamond Dogs, including The 1980 Floor Show, a US-only TV special aired only once on The Midnight Special, filmed at The Marquee Club in London for an invited audience of 200 fans.

Thomas Mulready of This Analog World is known for founding avant-garde art events and organizations such as the Cleveland Performance Art Festival, Ingenuity Fest, and dozens of live presentations on the history of music, including The Birth of Punk in Cleveland, Akron & Kent, When Andy Met Lou (Andy Warhol & Lou Reed), and annual celebrations of the birth and death anniversaries of David Bowie each January.

Vanity Crash were born on stage under hot lights in the crucible of sound and fury as the live band during an extended Cleveland run of Hedwig and the Angry Inch. The players were on fire, so they formed a band, becoming known for their outrageous live glam punk presentations featuring mesmerizing light shows, video projections and glamorous style spewing dark, edgy riffs and synched grooves. In 2013 and again in 2017, Mike Garson guested on Vanity Crash albums.

The show will alternate between video interview clips and live original music and Bowie classics. Attendees will be asked to show proof of vaccination or a negative test within 72 hours. Audience discretion is advised for those under 18 years of age.