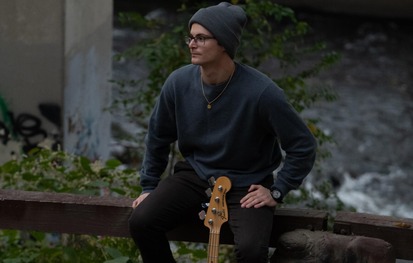 Northeast Ohio's freshest nu jazz crew makes their debut at the BOP STOP to celebrate the release of Unc D's upcoming two hour plus box set, "iPad Jazz x Splice Jazz Box Set, Vol. I." Tickets to attend this show in person are $15 each. This show will also be livestreamed on BOP STOP's Facebook page at showtime. Accessing the stream is free but donations are encouraged and can be made at www.givebutter.com/UncD

With over 250,000 streams on Spotify in 2021 alone, composer/producer/bassist Unc D delivers the energy of the Ohio jazz scene to a global audience by merging improvised instrumental music (jazz, funk, RnB) with beat making (hip hop, electronica, future). Unc D's specific blend of jazz funk is the result of beginning his career as a working bassist in Youngstown's dance, funk and RnB scenes, while also working with musicians who were studying jazz and composition at Youngstown State's Dana School of Music. His live group, informally known as Harshmellow, is a peak into some of the freshest undercurrents in the NE Ohio scene, as it features musicians from Youngstown, Akron and Cleveland. Harshmellow includes heavy use of keyboards and synthesizers, including a Yamaha EZ-EG Guitar Midi Controller in the place of electric guitar. Compositionally, the songs feature prominent groove-based improvisation, with often the only written part being Unc D's basslines.

"iPad Jazz x Splice Jazz Box Set, Vol. I" is streaming everywhere Jan. 13th, and is the culmination of a year's worth of music which utilized both of Unc D's signature production styles: iPad Jazz and Splice Jazz. Where as 'iPad Jazz' productions are done on the namesake tablet and included many overdubbed layers onto an ever growing beat, 'Splice Jazz' productions are the result of editing and manipulating live band sessions in a similar way to Teo Macero's work with Miles and his modern disciple, Makaya McCraven. The Box Set includes 16 previously released songs as well as 19 unreleased bonus tracks, in an effort to paint a sonic picture of a year's worth of innovative studio work.