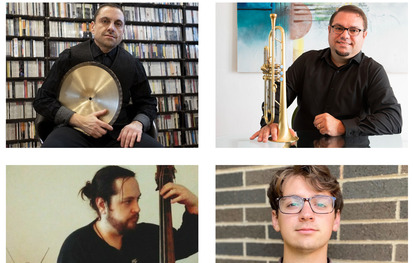 Chris Hovan Generations Quartet returns to BOP STOP for a concert that will also be livestreamed! Tickets to attend in person are $15 each. To access the livestream, visit BOP STOP's Facebook page at showtime. Viewing the stream is free but donations are greatly appreciated and can be made at www.givebutter.com/Hovan

Over the past 25 years, Hovan has played in a variety of Northeast Ohio venues with many of the city’s finest players including Rich Holsworth, Josh Smith, Francois Roland, Larry Ross, Jackie Warren, Jeremy Poparad, Bobby Selvaggio, Mark Russo, and the Jazz Shepherds. He has also shared the stage with such national artists as Arturo O’Farrill, Brian Lynch, Tony Monaco, Alex Harding, and Frank Lacy. Hovan presently works as a percussionist with the horn-based ensemble Funkology and plays drums with Bob Niederriter and with the guitar trio Jazz Shepherds.

Russo has also recorded albums as a sideman with the likes of Bobby Selvaggio, Kevin Scaley, Jeremey Poparad, Asher Barkin and Lou Armagno to name a few. Mr. Russo is an Edwards Trumpets, AR Resonance and Torpedo Bags supported artist. He is an active member of the Jazz Education Network (JEN) and The Ohio Music Education Association (OMEA), serving as the Jazz Editor of OMEA’s TRIAD magazine. Mr. Russo is also a Jazz Education Connection of Ohio (JECO) board member and representative for the Northeast Ohio area.

Guitarist Andrew Karkosiak’s main inspiration has always been the iconic Bill Frisell. As Karkosiak started to get serious about the instrument, he began transcribing solos and listening to everything he could get his hands on.

Bassist Taylor Arbogast has also immersed himself in the jazz legacy, being initially enthralled by the masterful work of the late Scott LaFaro. Taylor and Andrew first met at a jam session at Cleveland’s Bop Stop in 2019. Forging a strong duo, the pair has performed around the Cleveland area and through other jazz sessions first connected with Hovan and Russo. James is currently forging a career as a freelance artist, while Karkosiak attends the Dana School of Music at Youngstown State University.