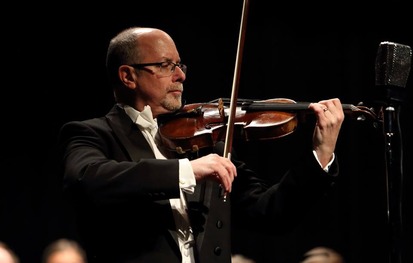 BOP STOP and The Music Settlement are proud to present violinist Steven Greenman and his Klezmer trio featuring Henry Samuels on bass and Walt Mahovlich on accordion. Tickets to attend this concert in person are $20. This event will also be live streamed on BOP STOP's Facebook page at showtime. Accessing the stream is free but donations are appreciated and can be made at www.givebutter.com/klezmertrio

Described by the Washington Post as “particularly impressive” and “extraordinary” by the Pittsburgh Post-Gazette, Steven Greenman is a consummate musical artist. He is a masterful violin soloist with symphony orchestras, a soulful performer of klezmer music, and a virtuoso performer of East European folk music. Steven’s influential recordings, klezmer compositions and dedicated masterclasses have been internationally acclaimed.

Steven’s traditional Jewish and klezmer compositions have been recorded by international artists and researched by scholars. Two of his liturgical melodies have been published by the Shalshelet Foundation for New Jewish Liturgical Music. His recordings Stempenyu’s Dream and Stempenyu’s Neshome have significantly expanded the traditional klezmer violin repertoire. Steven’s grand composition, Klezmer Concert Suite for Solo Violin and Orchestra embodies the full expressive and virtuosic range of the East European Jewish violin.