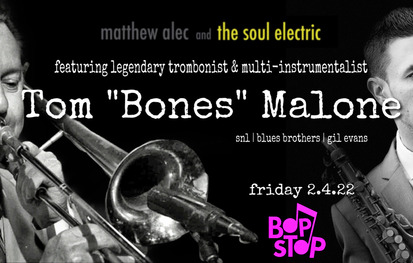 Fresh off the release of their debut album Cleveland Time which made the national college radio charts and was featured in several international publications, Cleveland’s high-energy jazz fusion act Matthew Alec and The Soul Electric is teaming up with the legendary trombonist and multi-instrumentalist Tom “Bones” Malone (who was featured on their album) for one night only! Tickets to attend in person are $15. This concert will also be livestreamed on BOP STOP's Facebook page at showtime. Accessing the stream is free but donations are encouraged and can be made at www.givebutter.com/MatthewAlec

Tom “Bones” Malone, trombonist, multi-instrumentalist, arranger, and producer boasts an eclectic career that has spanned several decades and is among the most experienced professionals in the business.

He is best known for his work with The Blues Brothers, David Letterman Show, and Saturday Night Live, although he has also worked with Gil Evans, Blood, Sweat, & Tears, Paul McCartney, David Sanborn, Miles Davis, Frank Zappa, James Taylor, and many, many others. He has played on 4,400+ television shows, 3,000+ radio & television commercials, over 1,500 recordings and thousands of live performances throughout the world and has done 2,700 arrangements for television.

Matthew Alec is a jazz and popular music saxophonist, founder and Executive Producer at Cleveland Time Records, and bandleader for the high-energy jazz fusion group Matthew Alec and The Soul Electric. Performing for over 20 years and holding a Bachelor’s Degree in Music from Kent State University, he has toured nationally and has opened for a number of A-list acts including Earth, Wind, and Fire, Incubus, Robert Randolph and The Family Band, Keane, Average White Band, Lupe Fiasco, OAR, and others. He has been fortunate enough to perform with Victor Wooten, Roy ‘Futureman’ Wooten, Steve Turre, Billy Beck, and he has recorded with Rock and Roll Hall of Fame inductee Bernie Worrell and former Saturday Night Live Musical Director, CBS Orchestra member, and Blues Brothers bandsman Tom “Bones” Malone. His debut album as a leader “Cleveland Time” (which features Malone) was released in 2021 and charted for several weeks on the NACC Jazz Radio Chart, peaking at #13, and received international press from Jazziz Magazine, All About Jazz, JazzMonthly.com, SoulTracks.com, Broadway World, WBSS Media, Glide Magazine, Cleveland.com, and many others. Matthew is proudly sponsored by Remic Microphones (Denmark).