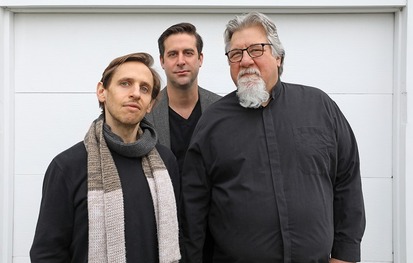 It has been nearly three years since Michael Formanek has performed on the BOP STOP stage and we are so excited to hear him play with his group Drome Trio. Tickets to attend this show in person are $15 each. The concert will also be streamed on BOP STOP's Facebook page at showtime. Accessing the stream is free but donations are encouraged and can be made at www.givebutter.com/DromeTrio

The Michael Formanek Drome Trio consists of Michael Formanek on double bass, Chet Doxas on tenor and soprano saxophones, and clarinet, and Vinnie Sperrazza on drums. They have played together in different configurations since 2018 and have worked on music collectively as a trio since mid-2020. They are all composers and bandleaders and cover a huge range of musical territory between them. This incarnation focuses primarily on the compositions of Michael Formanek. Their first recording as a group, Were We Where We Were, will be released in March 2022 on Formanek’s Circular File Records label on CD, limited edition vinyl, and digital formats. The stunning dark blue opaque vinyl LPwas mastered by Alex DeTurk. It comes in a full color gatefold jacket adorned with original artwork by Stewart III and was designed by Steve Byram and Warren Linn. The music is based on a set of musical palindromes that started out as graphic scores and were then reinterpreted into conventional music notation. For live performances in 2022 their concerts will center around this set of compositions and will also feature a selection of pieces from their vast collective trove of varied repertoire.

Michael Formanek has been described as “a bold and unclassifiable bassist and composer,” while The New York Times has noted that his music is always “graceful in its subversions, often even sumptuous.” Whether it’s for a small band or a large ensemble, he creates modern jazz that is earthy yet atmospheric, always alive with dark-hued melody and bone-deep rhythms, rich in dynamic possibility and the sound of surprise. Even with decades of experience to his credit – he got his start as a Bay Area teenager playing with the likes of Joe Henderson and Tony Williams – Formanek has made some of his keenest creative leaps in recent years, documented on a sequence of justly lauded recordings. His three ECM albums as a leader each scored rare five-star reviews in DownBeat. These included two discs – Small Places (2012) and The Rub and Spare Change (2010) – featuring a powerhouse quartet with saxophonist Tim Berne, pianist Craig Taborn and drummer Gerald Cleaver; the third was a magnificent record – The Distance (2016) – that showcased his compositions for an all-star big band, playfully dubbed Ensemble Kolossus. Formanek’s first album for the Intakt label, Time Like This (2018), saw him leading his new Elusion Quartet with saxophonist Tony Malaby, pianist Kris Davis and drummer/vibraphonist Ches Smith to “soul-stirring” effect, according to All About Jazz. Formanek’s latest release from Intakt Records, Imperfect Measures, his second solo bass recording was released in mid-2021. Were We Where We Were by the Michael Formanek Drome Trio with saxophonist/clarinetist Chet Doxas, and drummer Vinnie Sperrazza will be released in March 2022 on his newly minted label, Circular File Records.

Born in San Francisco in 1958, Formanek has performed in myriad contexts over the decades, including with masters from Gerry Mulligan and Stan Getz to Freddie Hubbard and Fred Hersch. Among his peers, the bassist has collaborated closely with Tim Berne, making a duo album with the saxophonist (Ornery People) and performing extensively in Berne’s iconic Bloodcount band in the ’90s. Formanek also released a solo LP – Am I Bothering You? – via Berne’s Screwgun label in 1998. Thumbscrew, a collaborative trio featuring Formanek and Halvorson alongside drummer Tomas Fujiwara, has released six lauded albums via Cuneiform. Formanek’s early recordings as a leader included a string of quartet and septet releases for Enja from 1990 to 1996.

Born and raised in Montreal, Canada into a musical family, Chet Doxas’ love of music was fostered by his father, a musician, music teacher and recording engineer; and his older brother and drummer, Jim, with whom he regularly performs.

He started performing and recording professionally while in his teenage years during what some would called the end of the good old days of Montreal - dance bands, burlesque reviews, radio shows, recordings, and night club work. During this time he began leading his own groups and completed his undergraduate and graduate degrees at McGill University in Jazz Performance, an institution where he later taught private lessons and ensembles.

Now based in Brooklyn, NY since 2014, Chet leads and co-leads several projects including The Chet Doxas Trio, Doxas Brothers Quartet, Landline, and Rich in Symbols. Since this move, he has had the opportunity to perform alongside or record with: Carla Bley, Steve Swallow, Dave Douglas, John Abercrombie, Michael Formanek and Ethan Iverson.

Vinnie Sperrazza is a Brooklyn-based jazz drummer. He has made a mark on the New York jazz community with his swinging, enthusiastic playing and his commitment to original projects. He has released three full-length albums of original compositions for Loyal Label and Positone Records, is planning a release of a trio album of original music with pianist Ethan Iverson and bassist Michael Formanek for 2022, and has played on over 70 albums as a sideman.

Notable touring has been with Stew and Heidi Rodewald in Stew and The Negro Problem and the Mark Morris Dance Group's Pepperland with a score by Ethan Iverson. He is a member of the Hank Roberts Sextet and Hank Roberts Trio, tours and records with the groups Landline, the Choir Invisible, Ember featuring Orrin Evans, Matt Bauder's Hearing Things, Vinnie Sperrazza-Jacob Sacks-Masa Kamaguchi PLAY, and trioTrio, and collaborates closely with bandleaders/composers Mike McGinnis and Michael Formanek.